Materials and Methods: In this in-vitro study, first 36 circular disks of two crowns were created: all-metal and metalceramic (18 for each crown). The disks were transferred to plates containing the suspensions 1 × 105 cfu/ml of C. albicans colonies. After 40, 80, and 120 minutes, the disks were rinsed in sterile normal saline and shaken at low speed to separate yeast cells. This suspension was cultured on Sabouraud dextrose agar culture medium with pour plate method and was then counted. Differences were considered significant when pË?0.05, using computer software SPSS version 18 for windows.

Conclusion: The results showed that adhesion of C. albicans to all-metal crowns was significantly less than metal-ceramic crowns after 80 minutes and 120 minutes.

Several microorganisms may exist in the oral cavity, some of which may cause severe diseases. Oral candidiasis, the most common human fungal infection, is one of the important infections of the oral cavity, caused by Candida [1,2]. Among different species of Candida, the most common (more than 80%) of oral infections are caused by three species: C. albicans, C. glabrata, and C. tropicalis [3]. The prevalence of C. albicans in mouth is reported to range from 3% to 48% with a higher prevalence in healthy children and young adults [4].

C. albicans invades the epithelium and specific glycoproteins, and co-agglutination reactions can have a higher affinity for epithelial cell adhesion [5]. The infection is controlled in healthy people by antimicrobial proteins in the saliva and oral microflora [6]. The use of dentures, drug use, hormonal factors, radiation therapy, diabetes mellitus, acquired immunodeficiency syndrome, and salivary disorder like Sjogren’s syndromes can predispose the patients to C. albicans [1,4,6].

C. albicans can be colonized in different surfaces of the oral cavity, including the tongue, palate, dental plaques, and restorations [7]. Different restorations have been suggested to cover the teeth’s lost crown; including allmetal, all-ceramic, and porcelain-fused-to-metal crown(s) (PFMs) [8]. As to the evidence, feldspathic/silica-based crowns had significantly lower survival, especially in posterior region [9], and comparison of different crowns showed the highest survival rates in PFMs (94.4%), densely sintered zirconia PFMs (90.4%), reinforced glass ceramic PFMs (89.1%), and glass infiltrated alumina PFMs (86.2%), respectively [10]. The main aspects of restorations, addressed by researchers, include the aesthetic aspects, survival, and their stability. Although these aspects are also very important, the chance of candidiasis infection is another important factor in superiority of different crowns. As an important factor in colonization of C. albicans, studies have investigated the adherence of this fungus to different restorative materials, including resin-composite [11], acrylic resin [12,13], and glass ionomer [14].

The fungal and bacterial community of dental plaque is subjected to physiological and compositional shifts as a result of environmental stresses generated by the placement of dental restoration and this is could lead to serious complications that result in the failure of the restoration [15,16]. The results of this study could provide the initial in-vitro results on colonization of C. albicans to different restorative materials. Because of none have compared the adherence between different crowns, especially two conventional restorations, including all-metal and PFMs. Health of support structures is as important as failure of a restoration, even more important. Therefore, this study aimed to investigate the adhesion and colonization of C. albicans to two conventional crowns.

This present in-vitro study is done in the immunology of infectious diseases research center, Rafsanjan University of Medical sciences, Rafsanjan, Iran from January to May 2015. Two types of all-metal and PFMs were prepared in circular-shaped (Dibateb Co., Tehran, Iran) discs with 5 mm diameter, 1 mm thickness (Figure 1) [17] and used to experiment the formation of biofilms. C. albicans was cultured on Sabouraud-dextrose agar medium (HiMedia, Netherlands) and incubated at 30°C for two days for preparation of new fungal colonies; then one colony of the mentioned fungus was placed in 100 cc of sterile Sabouraud-dextrose broth medium (liquid culture medium, HiMedia, Netherlands) and incubated on a shaker (Behdad, Tehran, Iran). Then a suspension of 1 × 105 cfu/ml (colony forming unit per ml) colony of C. albicans was counted. A total of 36 discs of two crown types (18 of each) were prepared as test specimens (Dibateb Co., Tehran, Iran), and three groups of six discs were placed in a plate containing Candida suspension for 40, 80, and 120 minutes separately; they were dipped in this suspension at the mentioned times and placed at 37°C. After the necessary time (40, 80 and 120 minutes), the specimens were removed and after a simple three-second washed with sterile physiological serum, they were placed in 1 ml sterile physiological serum (Razi Vaccine and Serum Research Institute, Karaj, Iran) and uniformly shaken for one minute with low circulation of vertex device (Behdad, Tehran, Iran) to allow the probable yeast cells adhering to the specimens be detached and suspended in the physiologic serum (Razi Vaccine and Serum Research Institute, Karaj, Iran). Subsequently, a certain amount (0.01 ml) of this suspension was cultured on the culture medium of Sabouraud-dextrose agar (HiMedia, Netherlands) with pour plate method [13]. The plates were placed in a 37°C-incubator for 48 hours. After the incubation time, the number of colonies was counted which was representative of the adhesion of C. albicans to the test specimens (Figure 2). By multiplying the number of colonies counted in dilution amount, the final number of candida colonies per each disk, within a 1 ml sterile physiologic serum (Razi Vaccine and Serum Research Institute, Karaj, Iran), was calculated at 40, 80 and 120 minutes as cfu/ml. It should be noted that each colony is equivalent to one living cell. In the end, the results were recorded for each group at three times in the relevant checklist and given to the analyst, who was unaware of the groups.

The collected data was input into the statistical software IBM SPSS Statistics for Windows version 18.0 (IBM Corp. 2009. Armonk, NY: IBM Corp) used for analysis. Results of numeric variable were presented as mean ± standard deviation (SD) and that of nominal variables by frequency (percentage) for categorical variables. Onesample Kolmogorov-Smirnov test showed that the data ere normally distributed in the two groups (p>0.05). Equality of variances was also confirmed by the Levene’s test (p=0.180). Comparison of colony count in each group among the three time intervals was tested by one-way repeated measures ANOVA. For all statistical tests, pvalues of 0.05 or less were considered statistically significant. 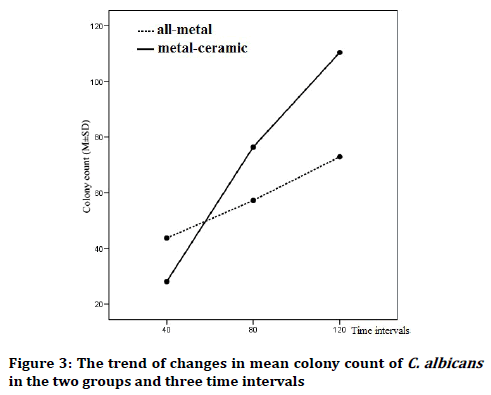 Figure 3: The trend of changes in mean colony count of C. albicans in the two groups and three time intervals

Time and crown type had a mutual effect and the slope of changes in mean colony count of C. albicans were significantly different in the measured intervals in two crown types (df=2, F=887.392, p˂0.001). Although colony count of C. albicans after 40 minutes was higher in all-metal crowns compared to PFMs, it significantly increased in PFMs in the next two intervals (80 and 120 minutes) (Table 1).

The results of the present in-vitro study on PFM crown and all-metal crown showed statistically significant differences in mean colony count of C. albicans in different time intervals. The maximum time was considered 2 hours in this study (120 minutes) and the results of mean colony count of C. albicans were compared between the groups of crown types and among the three time intervals (40, 80, and 120 minutes). The lower growth of C. albicans over time in all-metal crowns than of PFMs could be due to the better ability of polishing in metal, compared to ceramic; apparently, the metal bubbles are easily observed and can be treated by the clinician [18]. The higher colonization of C. albicans in the first 40 minutes in all-metal crowns could also be due to the ion release in the first phase from metal [19]. Nevertheless, as far as the authors are concerned, no study has compared the fungal growth between these two crowns, for their results to be comparable to ours.

According to the general opinion, the adhesion of C. albicans to Herkulin (resin restorative materials) is reduced by whole saliva and secretory immunoglobulin A [11,14,24,25]. Also, other materials in saliva have been suggested to detach C. albicans from the cell wall in plastic plates [26]. These results emphasize on the management of C. albicans in patients with conditions reducing the saliva flow or pH [27], such as acquired immunodeficiency syndrome, and salivary disorder like Sjogren’s syndromes [6]. As to the evidence, diabetic patients may have altered saliva flow, therefore, paying attention to C. albicans in these patients and including the clinical assessment and educating patients on appropriate care are valuable [28]. The role of saliva in reducing colonization of C. albicans can have treatment targets, as Candida strains have high resistance to different antibiotics [29,30].