Correction of Severe Spinal Deformities Using Posterior Osteotomy in Young Patients: What are the Outcomes?

Background: Surgical treatment of severe spinal deformities is a big challenge for most spine surgeons. From both patient and surgeon's perspectives, balanced correction without major complications is the goal. Several strategies have been used to reach this aim. Posterior spine osteotomies (POs) eliminate longer hospital stays for traction and obviate the need for combined anterior and posterior approaches thus minimizing complications. There are potential complications associated with POs especially three column osteotomies.

Methods: This is a retrospective-cohort-study conducted on 57 patients with severe rigid spinal deformity who underwent POs from 2013-2017. Patients' demographics (e.g. age, sex), type and severity of spinal deformity, type of osteotomy including smith Peterson osteotomy (SPO), pedicle subtraction osteotomy (PSO) and vertebral column resection (VCR), duration of surgery, bleeding in perioperative period and neurological deficit were evaluated. Patients have been followed for at least two years for Cobb angles and complications such as infection and device failure.

Conclusion: Posterior-only approaches with POs have successful outcomes in treatment of severe spinal deformities including scoliosis, kyphosis or kyphoscoliosis.

Severe spinal deformity is a rare condition that beside its negative impact on a person's appearance can cause significant pulmonary function limitations and neuromuscular disorders [1]. This demanding and prospective deformity is defined as abnormal sagittal and coronal curvature of spine [2] and involves all age ranges and genders while due to more flexible spinal column of youth, its related disabilities among elderly and youth don’t have similar pattern. Thus, the aim of the treatment in juvenile cases in addition to achieving patient’s satisfaction due to having less deformed spine is to balance coronal and sagittal support and prevention of future complications such as spinal cord compression [3].

There is still a great concern and controversies in selecting the best options of treatment in severe rigid spinal deformities. Variety of surgical methods has been recommended while the outcomes and complications of them are controversial. These methods include anterioronly, circumferential (anterior and posterior) and posterior-only approaches. The best technique should be selected by a surgeon based on type of deformity, aim of operation, curve magnitude, surgeons' abilities and experience [4-6].

Osteotomy techniques including pedicle subtraction osteotomy (PSO), Smith-Peterson osteotomy (SPO) and vertebral column resection (VCR) are the most common approaches that enable the surgeon to achieve better spinal correction and have considerably developed during recent decades [1,2,7]. In SPO technique we have only posterior elements resection, while PSO involves wider range of vertebral resection including pedicles and vertebral body. So, the range of deformity correction in PSO approach is greater than SPO [2,8].

Some of the studies suggest that VCR as a three-column circumferential technique, is the most efficient approach with best correctional outcomes; while others do not prefer this technique as the first choice because of being a difficult approach in its nature and having high complication rates [1,9]. In the current study, we have assessed outcomes of posterior osteotomy spinal deformity correction approaches regarding their correction ability and complications in educational hospitals of Isfahan, Iran.

This is a retrospective cohort study conducted on 57 patients with severe rigid spinal deformities referred to the clinic in 2013-2017 and underwent osteotomy surgical procedures with posterior-only approach. Severe spinal deformity includes those deformities that are rigid or have less than 50% flexibility during bending radiography in preoperative assessment [10]. Inclusion criteria were documented spinal deformity based on clinical and imaging findings, presence of 2 years followup records and the patients' consent for participation in the study. The spine surgeon chooses the type of the surgery based on the severity and the type of the deformity; as we used SPO in less rigid, VCR in more rigid cases and PSO is reserved for patients with moderate rigidity. Demographic information of patients (including age and gender), type of spinal deformity (scoliosis, kyphosis and kyphoscoliosis), previous history of spinal surgery, type of current spinal surgery (SPO, PSO and VCR), bleeding during procedure and perioperative complications were entered in a checklist. The study protocol was approved by Ethic Committee of Isfahan University of Medical Sciences (#IR.MUI.MED.REC. 1397.235) (Project code 397380). Patients' physical examinations including motor and sensory function of limbs were recorded. Pre and postoperative upright coronal and sagittal global spine x-rays were performed in all patients, and radiographic parameters, including Cobb coronal and sagittal angle was measured. All of this information was also obtained within 6 months and two years of follow up. Postoperative correction was measured as following:

We needed the pre and post-operative radiographies only in the deformed segments, not the whole spine. Obtained data were analyzed using SPSS-25 (IBM; The United States). Descriptive data were presented in mean and percentages. For analytics, Friedman Test, Kruskal-Wallis Test and Fisher's Exact Test were utilized. p-value<0.05 was considered significant.

Table 1: Demographic information of studied population based on type of spinal deformity

We observed significant improvement of both coronal and sagittal Cobb angle among all 3 groups of the studied patients (including scoliosis, kyphosis and kyphoscoliosis) during 2 years follow up Table 2. In scoliotic patients coronal Cobb angle improved significantly from 73 to 16, and in those with kyphosis sagittal Cobb angle changed from 80 to 45; finally in kyphoscoliotic patient's coronal and sagittal Cobb angle changed from 43 to 13 and 71 to 36 respectively. Figures 1 and 2 show pre and post-operative images in two of the patients (one with severe congenital kyphoscoliosis and the other with severe neuromuscular scoliosis) as an example. According to Table 2, the Cobb angle in all the patients have changed dramatically in comparison to preoperative Cobb angles; these changes have been unchanged during 2 years follow up because of the nature of a fused spine, indicating acceptable results of this type of surgery. 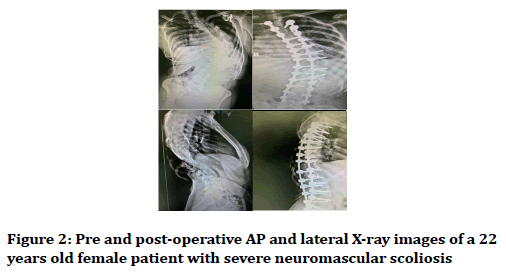 We used neuro-monitoring in 15 patients and in approximately 10% of patients neurological impairment occurred during procedure. All of neurological deficit presentations were root associated and rehabilitated within two months. There was no spinal cord lesion, and 4 patients suffered deep infections required repeated irrigation and debridement. Proximal junctional failure occurred only among 3 out of 57 patients. In average 1100 cc bleeding occurred during operation leading to mean 1.4 unit of packed red blood cell transfusion. Table 3 represents all complications in details.

Treatment of spinal deformities is of great concern worldwide; the surgical procedures are demanding and are considerably invasive. Thus various techniques have been introduced with different success and failure rates [2,11,12]. Conservative medical therapies should be strongly considered instead of early surgical treatment. Only nonresponses to medical therapy, progressive deformities or neurological deficit occurrence should be considered for surgical procedures [13].

There is no unanimous approach for treatment of kyphotic spinal deformities, though various posterior approaches have been introduced since recent decades. Anterior, posterior and combined approaches are among accepted procedures while their selection is correlated with the degree of expected correction, etiology of the deformity, preferences of the surgeon [18,19]. Similar to this study, Mo et al. tried to assess different posterior approach osteotomies considering their ability of kyphotic deformity correction. They presented acceptable outcomes of kyphosis correction through all of mentioned techniques of SPO, PSO and VCR. However, their degree of correction and complications were different from this study. All of the techniques were successful regarding anatomic balance, spinal alignment correction and neurogenic deficit corrections [20]. Mentioned factors were presented by other authors as well [21-23].

Enercan et al. performed a similar study in 2013 assessing variety of osteotomic techniques considering sagittal and coronal spinal deformity correction. The most successful outcomes were achieved through VCR surgery. A great concern they were struggling with was about sagittal alignment. In fact they presented that persistent spino-pelvic alignment for achieving long-term satisfactory outcomes is the most important issue that should be considered by expert surgeons. In this regard, further studies with long term follow-up periods are strongly recommended [2]. Several prior studies have assessed posterior osteotomies and declared successful outcomes [23-25].

Another issue that should be considered for making decision about surgical spinal deformity treatment is its complications. We have found considerable amount of blood loss yield to transfusion. Furthermore, in approximately 10% of patients neurological impairment occurred during procedure. All of neurological deficit presentations were root associated and rehabilitated within two months. In addition, 4 patients experienced deep infections following osteotomies. These complications including instability, neurological injuries and intraoperative complications have been abundantly reported as well [26,27]. In this study, proximal junctional failure occurred only among 3 out of 57 patients which is considerably fewer than what has been previously mentioned by other authors [28].

In general, considering coronal and sagittal Cobb angle correction along with low incidence of complications revealed successful outcomes of posterior-only osteotomy approach for treatment of severe rigid spinal deformities. Based on findings of the current study, posterior-only approach was accompanied with successful outcomes regarding correction of sagittal and coronal Cobb angle, with low incidence of complications in this two-years follow up cohort study.