Background: The effects of CAD/CAM blocks containing resin on oral cells, which are widely used in the restoration of teeth recently, are unknown. The aim of this study is in vitro examination of cytotoxic effect of resin and ZLS (zirconia-reinforced lithium silicate) including CAD/CAM blocks on human gingival keratinocyte (HGK) cells.

Material and Methods: In our study; samples were prepared (1.5 × 7 × 12 mm) under water cooling, using CAD/CAM blocks. Both surfaces of the prepared samples were polished using a diamond polishing kit (Clearfil Twist Dia, Kururay). Samples, whose surface (3 cm2/ml) were calculated according to the International Standards Organization (ISO 10993-12: 2012), were left for 1, 3- and 7-days incubation in DMEM. Cell viability of extracts of 1:1 ratio of filtered CAD/CAM blocks were examined by MTT test. Cell viability results were evaluated using one-way analysis of variance (ANOVA) test (p<0.05).

Conclusion: Although the extracts of CAD/CAM blocks after 7 days caused a decrease in the viability of HGK cells, they showed cell viability above the cell viability rate (>70%) stated in ISO standards.

Recently developed resin and ZLS containing CAD/CAM blocks are among the popular materials to produce tooth color restorations [3]. As an alternative to ceramic blocks, polymer infiltrated ceramic network (PICN) material and resin ceramic blocks have been developed. Della Bona et al. [4] reported that the properties of PICN materials are between porcelain and highly filled composite resin. Composite resinbased CAD/CAM blocks are ceramics integrated into a polymer network polymerizing at higher temperatures and pressures [5]. These blocks are reported to have better or comparable fracture toughness and higher abrasion potential than commonly used composite resin materials [6]. ZLS, lithium metasilicate and lithium disilicate offer a pair of microstructures consisting of very fine crystals and glassy matrix with highly dispersed zirconium oxide [7-10]. This material can be used without the need for a crystallization process unless more durability is required. Although the optical and mechanical properties of resin-based composite CAD/CAM blocks are low compared to ceramics CAD/CAM blocks, being close to Young's modulus dentine are the biggest advantages with easy bonding and repair [11].

Restorative materials containing resin can release monomers in their structures depending on the physical and chemical effects in the mouth environment [13]. It is stated that bisphenol-A glycidylmethacrylate (Bis-GMA), triethylene glycol dimethacrylate (TEGDMA) and urethane dimethacrylate (UDMA), which are one of the basic monomers in the organic matrix of these materials, cause cytotoxic and mutagenic effects on cells [14].

In the study, four resin CAD/CAM blocks (Cerasmart; GC Europe, Brilliant Crios; Coltene, Vita Enamic; Vita Zahnfabrik and Grandio Blocs, VOCO GmbH) and ZLS block (Celtra Duo, Dentsply Sirona) were used (Table 1). The materials used in the study were obtained by slicing from CAD/ CAM blocks with a low speed (150 rpm) water cooled diamond disc precision cutting machine in a size of 1.5x7x12 mm. Both surfaces of the prepared samples were polished using a diamond polishing system (Clearfil Twist Dia, Kururay) under water cooling. Then, all samples were cleaned with ultrasonic cleaner (Pro-Sonic 600; Sultan Healthcare, NJ, USA) for 10 seconds with deionized water and then dried with air pressure. Samples (n:4) whose surface area is calculated according to ISO 10993-12:2012 [15] standards (3 cm2/ml) incubated in 3 ml serumfree Dulbecco’s Modified Eagle Medium (DMEM) and control group in serum-free medium, for 1, 3 and 7 days at 37°C, with 5% CO2 oven. The extracts of CAD/CAM samples that were kept in serum-free DMEM medium, which were filtered after 1, 3 and 7 days, were used for the experiments in cytotoxicity at a ratio of 1:1.

The first passage was performed after the cell line (HGKs) used in the study was dissolved under appropriate conditions and required experimental conditions, after 90% confluence. The number of cells with the desired density was calculated in the 96-well cell production plates. Then, for the experiment, it was homogenized with 10% FBS (fetal bovine serum) and 1% antibiotic medium and its suspension was prepared as 1×105 cells/ml [16]. This cell suspension was divided into 96-well cell production plates at 100 μl/well and incubated for 24 hours in a 5% CO2 incubator. At the end of this period, the culture medium was aspirated and removed from the culture medium in 96-well cell production plates, and the extracts in which fillers were kept were placed in the wells as 100 μl/well, and then incubated in a 5% CO2 incubator for 24 hours and then MTT ([3-(4,5-dimethylthiazol-2- yl)-2,5-diphentyltetrazolium bromide] test was performed.

The MTT solution (Sigma, USA) was homogenized by mixing with serum-free and antibiotic-free oral keratinocyte medium and the final concentration was prepared as 5 mg/ml. 24 hours later, 10 μl/ well of MTT solution was placed in each well of incubated 96-well cell production plates and they were incubated for 4 hours at 37oC in a dark environment. Then, it was read in the optical reader (BIO-TEK μQuant, BIO-TEK Instruments, Inc, USA) at 550 nm and the output values were compared with the control wells. Experiments were repeated at least three times. 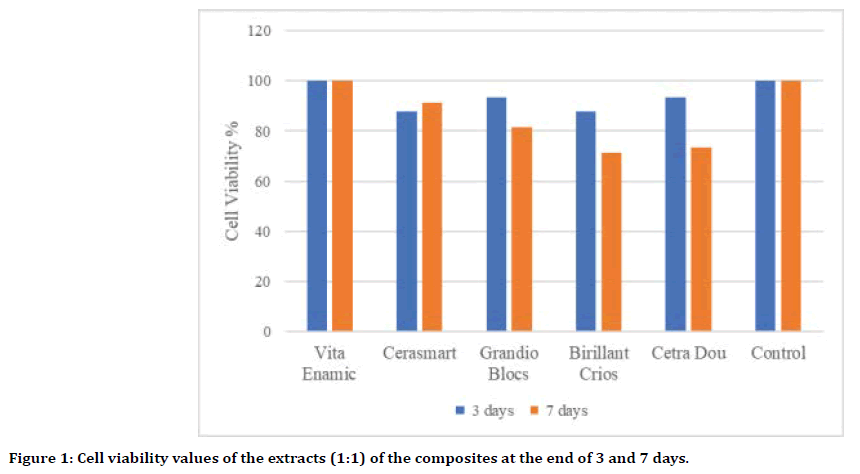 Figure 1. Cell viability values of the extracts (1:1) of the composites at the end of 3 and 7 days.

*a-b shows the difference between the significance levels of the lines p<0.05.

Table 2: Cell viability values of the 1:1 extracts of the composites at the end of 3 and 7 days.

Recently, manufacturers have developed new CAD/CAM formulations that combine the advantageous properties of ceramics such as durability and color stability, and improved bending and low abrasiveness of composite resins [17]. In this context, CAD/CAM blocks with resin content are presented to the use of clinicians with the advantages of easy preparation, polishing and reparability. Dental materials are generally physically and chemically examined while their biological effects are ignored. All CAD/CAM restorations are in long-term contact with oral soft tissues, especially keratinized epithelium. These materials should be thoroughly examined for their biocompatibility before clinical applications. Although various test methods are used in research evaluating the biocompatibility of restorative materials used in dentistry, animal experiments and cell culture tests are widely preferred [18]. Cell culture tests are used more because they are better standardized and reproducible and compared to animal experiments; they are easy to apply, less time consuming and economical tests [19].

To assess the cytotoxicity of dental materials, ISO 10993-12:2012 proposed several cell culture test models [15]. These are test methods of direct contact (direct method), indirect contact with a barrier (indirect method) and the method in which extracts from biomaterials are added to the cells (extract method). Lim et al. [20] in their study comparing these in vitro test models used to evaluate the cytotoxicity of composite resins, suggested the extract test due to higher sensitivity if a single test model will be used. In our study, we as well used the extract test method on HGK cells. As a result of our study, in which we analyzed the toxicity of different CAD/ CAM blocks on HGK cells with the extract test method; our null hypothesis was rejected as the extracts (1:1) of CAD/CAM blocks at the end of 7 days caused a decrease in cell viability values.

Monomers similar to traditional composite resins are used in the structure of resincontaining CAD/CAM blocks [21,22]. In their study on monomer elution of CAD/CAM blocks, Mourouzis et al. stated that TEGDMA and UDMA and Bis-EMA monomers elute but Bis-GMA monomer elution was not observed [23]. In many studies, it has been stated that Bis-GMA, UDMA and TEGDMA monomers are cytotoxic [24- 26]. Grenade et al. [27] in fact, PICNs achieved similar results to lithium disilicate glassceramic in terms of HGF behavior (attachment, proliferation and spreading), despite the presence of dimethacrylate resin infiltrating the glass-ceramic network. Yet regarding PICNs, take Tassin et al. [11] did not show any direct cytotoxic effect, contrary to conventional lightcured composites, nor any effect in terms of proliferation, extracellular matrix synthesis, morphology or inflammatory response. Those results were explained by the high degree of conversion of PICNs. In our study, PINC block (Vita Enamic) from resin-containing blocks did not show toxic effects, while compositereinforced block (Brilliant Crios) showed the least cell viability.

It has been reported in the literature that the resin-containing blocks' not having a toxic effect on cells, which may be due to controlled polymerization under the optimum pressure and temperature, and the firm binding of the UDMA monomer to the ceramic network [27]. In addition, it is thought that the reason for PICN CAD/CAM block's not having a decrease in the cell viability is due to not having Bis-GMA monomer [28] in its structure, which is determined as toxic and depends on the high degree of conversion. In their study, Pabst et al. [29] examined the effects of CAD/CAM all-ceramic (e.max CAD LT, e.max CAD HT, Empress CAD, Mark II) materials on cell viability on human gingival fibroblasts; The cell viability of all materials did not show a significant decrease in all time periods (3, 6, 9 and 12 days). Of the materials, only a significant decrease in cell viability was noted for the 7th day of the Empress CAD group test period. In their study, Rafaelli et al. [30] evaluated the cytotoxicity of zirconia and feldspatic CAD/CAM discs on L929 mouse fibroblast cells by MTT method in vitro and stated that zirconia exhibits more biocompatibility.

Rizo-Gorrita et al. [31] analyzed human gingival fibroblast (HGF) between zirconium (Y-TZP) and new zirconia-reinforced lithium silicate ceramics (ZLS) in their study and the results suggest that HGF cultured on Y-TZP have a greater cell proliferation, coverage, and spreading than those cultured on ZLS, which translates in a greater affinity for the surface of Y-TZP. They stated that Y-TZP resulting in better cellular response was associated with less surface roughness.

In our study, the ZLS CAD/CAM block did not produce a significant cell reduction in cell viability for 1 and 3 days but showed less cell viability in 7 days compared to the control group. The fact that the ZLS-containing material causes a decrease in cell viability at the end of 7 days is considered to be due to the absence of a second crysterization process. Within the limitations of this in vitro study is to select only a single cell line and test model in the evaluation of the cytotoxic effects of CAD/CAM blocks. The use of different test models using other cells associated with mouth tissue as well as differences in cell lines may cause variability in cytotoxic responses. In subsequent studies, it may be considered to work with more cell types and test models to confirm cytotoxic properties of these CAD/CAM blocks.

In our study where we examined the toxic effects of resin containing CAD/CAM blocks on HGK cells.

Extracts of CAD/CAM blocks at the end of 3 and 7 days (1:1 ratio) caused a decrease in the viability values of HGK cells. (except PINC CAD/CAM block).

All CAD/CAM blocks that we used in the study showed cell viability above the rate of acceptable cell viability (70%) specified by ISO, at the end of 7 days.

CAD/CAM blocks other than the block prepared by PINC method decrease the viability values of HGK cells as time progresses.