Preauricular incision is made along the natural crease anterior to the tragus almost invisible scars are main advantages of a preauricular approach. This surgical technique provides access to the superior part of the TMJ and anteromedially displaced mandibular condyle [1].

Gross scales make an overall assessment of facial motor function. regional scales, in contrast, ascribe independent scores to different areas of facial nerve function, sometimes with weighting to reflect the greater or lesser importance of given areas of the face, such as eye closure or mouth movement. In regional systems, forehead scores may have lower impact due to less impact on cosmesis, relatively less associated functional disability [3].

The scale that Dr. House introduced in 1983 is a gross scale was soon modified by Dr. Brackmann in 1985 to give rise to the current six-level House-Brackmann scale based on their degree of facial nerve dysfunction. This scale, which was formally adopted as the universal standard of the American academy of otolaryngology–head and neck surgery on recommendation of the facial nerve disorders committee sought to group together patients with similar degrees of disability [4].

The measurement of facial nerve function in a consistent, reliable manner is an important but elusive goal due to the inherent complexity of facial nerve physiology. Not only does the nerve control multiple motor regions of the face but also it controls special functions such as lacrimation, salivation, and taste. The major problem in evaluating the results of facial nerve injury lies in the subjective methods of assessment and reporting. the House-Brackmann grading system is a gross subjective scale that considers overall facial functions and assigns patients to six categories. This system intentionally considers facial expression at rest and in motion as well as the presence of secondary defects [5,6].

In our study, we used the House –Brackmann scale in evaluation the facial nerve dysfunction after preauricular and submandibular surgical approaches after one day, one week, one month, three months and six months, and assessment improvement.

In the third week of intrauterine development appears the facio-acoustic primordium, this structure originates from the rhomb encephalon and develops in the rostral sense to the otic placode [7].

The primordium splits in an around 4 weeks into a caudal main trunk and a rostral sensory (chorda tympani) trunk which enters the first mandibular arch.

The majority development anatomy of the facial nerve is takes place within the first 3–4 months of fetal life [8].

The peripheral motor divisions appear by the eighth week when development of the second arch progresses to individual muscle groups. At this time, the horizontal and vertical portions of the facial nerve run anterior to the external auditory canal and have started to demarcate. The weeks following the eighth week are characterized by extensive arborization of the peripheral facial nerve and the corresponding development of the muscles of facial expression.

The facial nerve finally exits the stylomastoid foramen in its usual position by week 30, but it continues to lie superficial until the development of the mastoid tip between 1 and 3 years of age [9].

The facial nerve has the longest and most tortuous course in the skull of any cranial nerve. There are four brainstem nuclei to cranial nerve VII, the facial motor nucleus, which controls muscles of facial expression; the superior salivatory nucleus, which sends fibres for lacrimal gland secretion and salivary secretion; the nucleus solitarius, which receives fibres of taste for the anterior two-thirds of the tongue; and the trigeminal sensory nucleus, which receives sensory fibers for a small portion of the external ear [10].

The facial nerve arises in the pons as 2 roots: A larger medial motor root and a smaller lateral sensory root, also called the (nervus intermedius) which contains fibres arising from both the sensory nucleus and the salivatory nuclei. both roots exit the lower lateral aspect of the pons between the inferior cerebellar peduncle and the olive [11].

The efferent branchial motor (special visceral efferent) to supply the muscles derived by the mesoderm of II branchial arch which are stapedius, stylohyoid, posterior belly of digastric, and muscles of facial expression, including the buccinator, platysma, and occipitals, occipitofrontalis muscles see Figure 1 [12]. The visceral motor (general visceral efferent somatic) originates in superior salivatory nucleus and parasympathetic innervation of the lacrimal, submandibular, and sublingual glands and glands within the mucous membrane of the nose and hard and soft palates see Figure 1 [7].

The general sensory (general somatic afferent) component of the facial nerve is complex and consists of, sensory fibres from the skin of portions of the auricle and external auditory canal See Figure 1 [13].

There are 5 main branches of the facial nerve in the face with direct clinical relevance to the House-Brackmann scale: temporal, zygomatic, buccal, marginal mandibular and cervical branches (Figure 2) [15]. 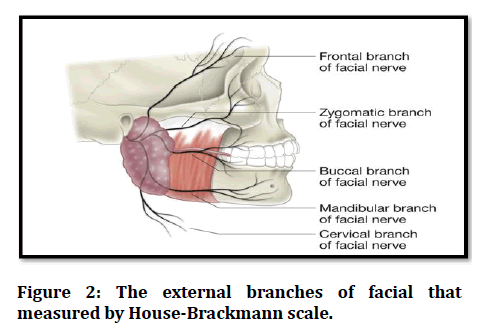 Figure 2: The external branches of facial that measured by House-Brackmann scale.

The functionality of these 5 branches is the main concern in the of grading facial nerve recovery after surgery by using the House-Brackmann scale [16].

The trajectory of the frontal branch is classically defined by (Pitanguy’s line) (Figure 3) a line drawn from a point 0.5 cm inferior to the tragus to a point 1.5 cm superior and lateral to the eyebrow, although this has been widely criticized as reliant on soft landmarks and therefore inconsistent [17]. Figure 4 presents the extracranial branches of facial nerve with relation to the facial layers. Figure 4: The extracranial branches of facial nerve with relation to the facial layers.

A prospective study for fifty patients for assessment a facial nerve dysfunction after preauricular and submandibular surgical approaches by using a House– Brackmann grade scale in group of patient’s ages between (18-75) years old those arrived at maxillofacial surgery department at AL-Shaheed Gazzi AL-Hariri Hospital, Medical City–Baghdad, from January 2020 until April, 2020.

General evaluation and assessment for the patients

A standardized case sheet was used for each patient and used for evaluation, assessment improvement of facial nerve physiological action.

The general formula of the patient’s case sheet was:

The pre and postoperative photographs were taken by the same photographer using the same camera I phone max pro mobile (2x to 2.5x) and magnification. The patients were photographed facing the camera in the following positions: At rest, raising the eyebrows, closing the eyes with minimum effort and with maximal efforts, blowing the mouth (Figure 5) The patients were assessed by using House-Brackmann scale and the data were statistically analysing according to branch of facial nerve its effect (Figure 5). Figure 5: Dr. House-Brackmann developed an easy method for measuring facial movement specifically at the eyebrow and corner of the mouth and compared the results with measurements on the unaffected side as depicted here. A scale of 0.25 cm divisions is used for the measurements, with a total possible score of 8 (4, or 1 cm, for the mouth; 4, or 1 cm, for the eyebrow) that can be converted to the 6- point House-Brackmann scale.

Mark point in midline of lower lip and another points in corners of mouth (commissure of lips) and measure 1cm for each side and subdivided into 0.25cm and measure from middle point to effected side point and compared result with measure of the normal side point and decrease in measurements in effected side given the description the House-Brackmann facial nerve grade (Figure 5).

The assessment for frontal branch of facial nerve by mark point in the mid-portion of the top of the eyebrow and measuring the is determined upwards (superior) movement from each reference point scores 1 point for each 0.25 cm movement, up to a maximum of 1 cm in comparison measurements with normal side giving the House-Brackmann facial nerve grade (Figure 5 and Table 1).

Table 1: The House-Brackmann scale. D=Distance between location of point on neutral image and that in the test image.

The total number of study patients was fifty of them were evaluated for frontal and marginal mandibular branches of facial nerve function after preauricular and submandibular incision.

The distribution of study patients by age and gender is shown in. Study patients’ age was ranging from 18to 75 years with a mean of 45.16 years and a standard deviation (SD) of ± 16.3 years.

The most common type of lesion was parotid pleomorphic adenoma (52%).

The association between grades of House- Brackmann Scale for marginal mandibular branch of facial nerve after one week is shown in table 4. Mean of time of operation was significantly (P= 0.001) higher in patients graded II than that in those graded I. No statistical significant associations detected (P ≥ 0.05) between grades of House Brackmann Scale and all of characteristics.

Table 4: Association between grades of House-Brackmann scale for marginal mandibular branch of facial nerve after one week.

The identification and preservation of the facial nerve remains an important step in head and neck surgery and risk of iatrogenic injury is due to variability in the number of nerve branches, the varying positions [18,19].

The facial nerve injury causes a weakness of innervation of the circumoral musculature, leading to asymmetry of facial expression and imbalance of the lower lip and inability to move it laterally and downward, or enable raise eyebrows has a great impact on the patient’s quality of life and self-appearance and might lead to legal claims [20,21].

In this research, the age of patients ranged from 14 to 80 years. We noticed that 72% of study patients were aged between 40–75 years and agree with study reported that by [23] that found 80% of the patients in same ranged group have tumours.

The patients aged between 40-75 years see 18 cases 69% from 26 patients after parotidectomy (superficial ,deep lobe parotidectomy) and see slightly facial nerve weakness and the House-Brackmann grade II in first week and recovery after one month and (P value 0.527).

This agrees with study reported by [23] that found 70% of the patients after surgery have weakness of marginal mandibular branch of facial nerve and recovery of nerve at after one month.

On the other hand, this study disagreed with study [26] after parotidectomy postoperative facial nerve dysfunction occurred in 33.3% of the patients in all branches of facial nerve Regarding gender, proportion of females was higher than males (64% versus 36%) with a male to female ratio of (1:1.7.) no evidence of a difference in incidence between the sexes was reported.

Department of Oral and Maxillofacial Surgery, University of Baghdad, Iraq