Calculus is formed on the natural teeth surfaces and is a mineralized bacterial plaque derived from saliva. It is located on the areas which salivary glands open into the mouth, buccal surfaces of maxillary molars and the lingual surfaces of mandibular anterior. In the present case of an 32 years-old woman, the calculus which is enormously big calcified mass that the patient can’t close her mouth covers the entire mouth floor and extends from premolar to the premolar in the other side. size and the settlement of the calculus are unusual as different from the cases we have seen before.

Calculus is a calcified mass that is usually seen in the areas where the salivary gland ducts open into the mouth. It was first used to describe the mineral structures on the teeth in the 18th century [1]. In 1964, Theilade stated that the calculus was formed because of the precipitation of salivaderived mineral salts in germ-free animals. It may occur on natural teeth surfaces as well as on the surfaces of dental prosthesis. Supragingival calculus is located at the coronal of the gingival margin, while subgingival calculus is located apically. Both are calcified masses, 80-85% of which is made up of inorganic structures [2]. Calculus constantly contains live bacterial plaque. Supragingival calculus is white yellowish in color while subginval calculus is dark brown and black in color [3]. Subgingival calculus generally cannot be visible with naked eye, but is noticeable by using periodontal probe, and can also be observed on dental radiographs. Subgingival calculus consists of bacterial deposits mixed with gingival fluid and blood products, attachments may extend to the base of the pocket, and uncalcified plaque may be present at the most apical part. Calculus is tightly bound to the tooth surfaces as the pellicle under the bacterial plaque is also calcified. It is in close contact with enamel, dentine crystals and cementum surfaces. Calculus often accumulates on the facial surfaces of the maxillary molars and on the lingual surfaces of the mandibular incisors [3]. They are in retentive or unusual areas that are difficult to remove in the oral cavity and penetrate more tightly into areas with surface irregularities [2]. Generally, they are in individuals with poor oral hygiene. Supragingival calculus consists of organic and inorganic (70-90%) components. Inorganic component consists of 75.9% calcium phosphate, 3.1% calcium carbonate, trace amounts of magnesium phosphate and other elements [4]. The main inorganic components are 39% calcium, 19% phosphate, 1.9% carbon dioxide, 0.8% magnesium, trace amounts of sodium. It also contains zinc, strontium, bromine, copper, tungsten, gold, aluminium, iron [5].

A 32-year-old female patient was examined with complaints of discomfort, pain, difficulty in closing her mouth, inability to eat something and weight loss for a long time. During the examination, a solid yellow-green calcified calculus mass, which is large enough to prevent the patient from closing his mouth, eating, and chewing function, almost overflowing from the patient's mouth, was seen (Figure 1). The calculus completely covered the facial, lingual, incisor and occlusal surfaces of all teeth from distal to mesial, from premolars to premolars, and the floor of the mouth. The patient's oral hygiene was very poor, and it was observed that she had a bad breath in her oral examination. She does not have a remarkable medical history in her anamnesis and a systemic disease that requires any medication, but she said recently that she lost a lot of weight and is around 40 kg. In the panoramic X-ray and tomography was observed that dental calculus was also observed subgingivally, and a huge mass of calculus was diagnosed, covering the mouth floor completely (Figure 1 and Figure 2). In the panoramic X-ray, an ovalis, marbled and radiopaque appearance was seen, especially in the lower inter-premolar region (Figure 2). Under local anaesthesia, the hard calcified mass and calculus on the tooth surface were completely cleaned by using ultrasonic instruments. In the first session, it was aimed to solve the problem caused by the patient's inability to close his mouth completely, causing pain, discomfort, and inability to feed, and to stabilize the patient's condition. The patient's discomfort with the image that she tried to hide by wearing a mask due to the Covid-19 pandemic was resolved in the first session. Oral hygiene instructions were given to the patient and the importance of coming to routine controls was especially emphasized. 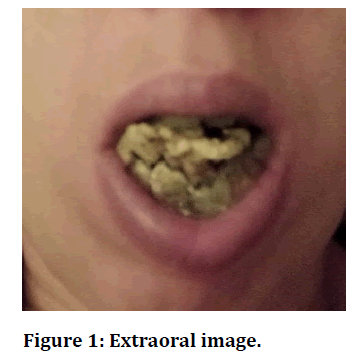 The calculus is calcified form of soft dental plaque formed between 1-14 days. (6) 50% of the mineralization occurs within 2 days and 60-90% within 12 days [6]. Saliva is the mineralization source for supragingival calculus [7]. Increase of saliva PH and precipitation of colloidal proteins of saliva are also among the causes of calculus formation. Calculus does not directly cause gingivitis but creates an area on which microorganisms will locate. At the beginning of the 17th century, Pierre Fauchard, in his classical thesis, identified a mass of calculus around the impacted 20-year-old tooth, 20 times larger than the dimension of the molar tooth. This type of bulky and unusual calculus masses was also reported in ancient times [8]. Mandel stated that the extraordinary, giant calculus masses called 'heavy calculus' formed in the mandibular anterior region with a probability of 90%, but they are also frequently found on the buccal surfaces of the upper molar teeth [8]. Heavy calculus formation in these regions has been associated with the fact that these are regions where the secretions of the major salivary gland ducts open to the mouth [9]. In this case, the patient had a huge dental calculus mass in the supragingival and subgingival areas, covering the entire oral cavity and the surfaces of her teeth. The reasons of the patient having poor oral hygiene are caries in the mouth and the presence of broken teeth and surface irregularities that play a role as predisposing factors have led to an increase of deposits. It has been observed that the reason of patient's having poor oral hygiene was that she had recently lost a family relative and emotional depression she had. In addition, the patient having a dentist phobia prevented regular dentist visits. It is very important to diagnose the factors that cause calculus formation in early stages. For this reason, it has a great importance to evaluate the anatomical factors and the irregularities on the tooth and root surface from this point of view.