The diode laser is becoming widely used for oral soft tissue procedures, due to approximate relation of infra- red wavelengths with absorption of oral soft tissue pigments. Thermal damage is one of the drawbacks that result from heating the tissue by laser. The aim of this study is to evaluate histologically the incisions properties of oral soft tissue created by diode 940 nm laser in combination with exogenous stain. Materials and methods: 60 samples of dimensions (1.5 × 1 × 0.5) cm from three sheep tongues collected directly after animal sacrificing divided into two groups. Group I, 20 samples without stain, Group II, 40 samples stained with erythrosine stain 3 %. The incisions made by 940 nm diode laser, with power 2 W in continuous mode. The incision time was recorded for all incisions. For histological examination the samples collected in sterile containers with buffered formalin 10% to evaluate the depth and width of incisions and of lateral damage, the regularity and quality of incisions margin. Result: The group II shows the highest quality incisions, decrease in lateral damage both vertically and horizontally, decrease in the incision time than with group II. Conclusion: using exogenous chromophores can assist producing incision with more regular margin and minimize thermal tissue damage.

The laser is an intense light generated by stimulation of emission radiation with coherence, monochromaticity and collimation properties. In 1964 was the first description and use by Maiman based on theories of Einstein in which a photon can stimulate the emission of the similar photon [1]. The laser is classified into solid, semisolid, liquid and gas laser according the active medium which produces the laser energy [2]. Laser-tissue effects and interaction mechanisms are interplay between laser parameters likes wavelength or wavelength band of laser source, irradiance or pulse energy, pulsed or continuous (C.W) mode, spot size of laser beam and physical tissue properties [3]. When the tissues or any surface are irradiated by laser light, specific interactions can occur. The energy of laser beam can be reflected, scattered, transmitted or absorbed when hitting the tissue [4].

There will be minimal or no absorption of laser energy if laser beam can be transmitted through the tissue and so therefore minimal or no thermal effect can occur. The transmission depth inside the tissue based on laser parameter which are mainly (wavelength, exposure time, delivery mode, etc), and tissue properties which are (optical, thermal, conductivity). The beam of laser which is not transmitted through the tissue is absorbed, when tissue absorb the laser energy, this energy will converted to heat. To obtain the desired thermal biological effect, the key is the selective absorption of specific laser wavelength by target chromophores [5].

There is characteristic absorption for each tissue which is depend on the composition of tissue and its target chromophores content. For mammalian tissue the melanin, hemoglobin, water, proteins are the basic chromophores exist. The selection of laser wavelength which is strongly absorbed by chromophores exist inside the tissues to target the specific tissues [6,7].

The hemoglobin and oxyhemoglobin are considered as the light receptors (chromophores) of the biological tissues present in the blood corpuscles which circulates in blood vessels, make them desired for diode laser absorption, which result in very good coagulation and hemostasis effect. they are red in color and exist internally within the tissue presented as internal chromophores. We adapted an erythrosine stain in 3% concentration on the tissue which act as an external chromophores to enhance the absorption of laser energy by tissue. Because the thermal effect of laser on the biological tissue is depends on the relationship between absorption coefficient of tissue and ultimate absorption of diode laser [8].

Sample preparation: This study is performed on three fresh sheep’s tongue collected directly after animal sacrification from a local slaughter, washed and cleaned by normal saline. The erythrosine satin was used with 3% concentration (Figure 1). 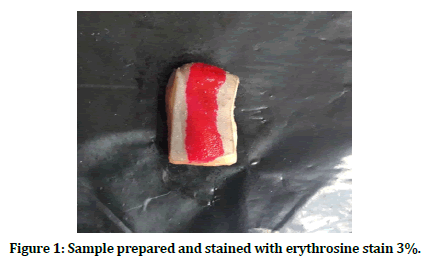 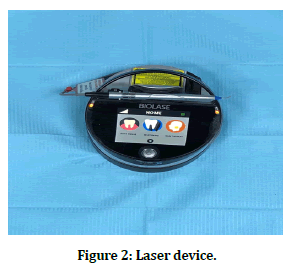 The anterior tow third of each tongue was divided into two half right and left, 60 samples of dimensions approximately (1.5 X 1 X 0.5) cm were divided into two groups, The length of incisions was 1cm with laser beam directed perpendicularly on the surface. Group I, 20 incisions made with normal saline application on the dorsum of tongues, Group II 40 incisions made directly after application of erythrosine stain 3% by micro-applicator along the planned incisions, as shown in figure 3. The time for each incision was recorded by stopwatch. Then the samples placed in sterile containers with formalin buffered at 10%. The histological analysis blindly done by pathologist with optical microscope (Humanscope, Germany) power X 40, the samples are sliced and sectioned with microtome into thin cross section. Then fixed with 4% formaldehyde in phosphate–buffered saline to prevent tissue degradation. Later the samples are passed through more progressively ethanol bath to remove the water. After that through hydrophobic clearing agent, xylene for removing alcohol. Lastly the paraffin wax used as an infiltrating agent and epoxy resin as un embedding media. 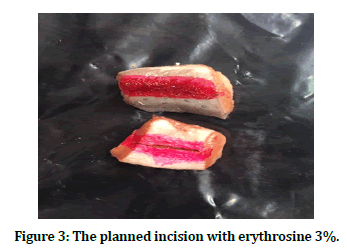 Figure 3. The planned incision with erythrosine 3%.

According the protocol research of this study, the comparison were between two groups, group I as control group, the incisions only with normal saline and group II as study group, the incisions made with adding erythrosine stain 3% on the surface. The evaluated parameters were, clinically, the working time was recorded for all incisions which represent the exposure time of laser, histologically, measuring the depth, width, lateral damage and regularity of all incisions (Figure 4). There was highly significant decrease in the incision time for group II with (P ≤ 0.01) as shown in Table 1 and Figure 5.

Table 1: Comparison between group I and group II in incision time. 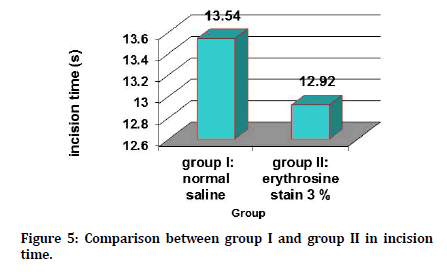 Figure 5. Comparison between group I and group II in incision time.

There was an increase in the incision depth of group II, but was not statistically significant as shown in Table 2 and Figure 6. 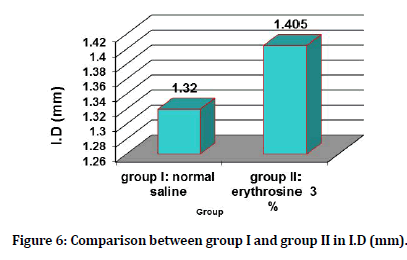 Figure 6. Comparison between group I and group II in I.D (mm).

There was an increase in the incision width of group II but was not statistically significant as shown in Table 2 and Figure 7. 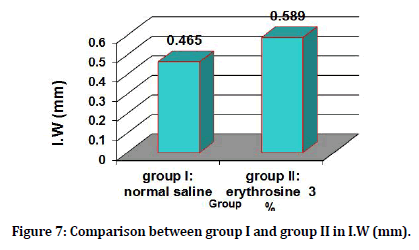 Figure 7. Comparison between group I and group II in I.W (mm).

There was a highly significant decrease in the damage depth group II as shown in Table 2 and Figure 8. 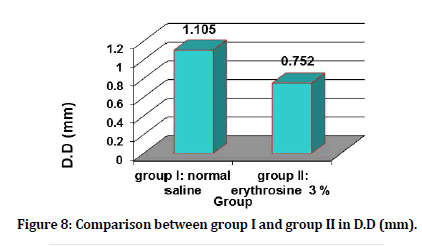 Figure 8. Comparison between group I and group II in D.D (mm).

There was highly significant decrease in the damage width of group II as shown in Table 2 and Figure 9. 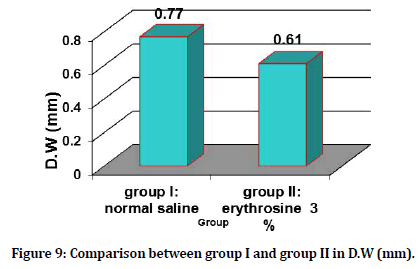 Figure 9. Comparison between group I and group II in D.W (mm).

Quality and regularity of incisions

There was highly significant difference between two groups which show that the highest incision quality was for group II with (P ≤ 0.01) as shown in Table 3.

Table 3: Distribution of sample according to Regularity and quality in group I and group II.

There are many studies about laser use in oral surgical soft tissues procedure, only few of them focused on the marginal damage caused by laser devices, and just some of them take in account the variables like wavelength, exposure time, power, emission mode.

Cercadillo-Ibarguren et al. states that there is always higher degree of carbonization with use of diode and CO2 laser, may be due to wavelength, high power, continuous mode used in their study.

There are many factors effect that lateral damage, part of them related to the tissue such as optical properties, thermal conductivity, chromophores existence, and other that related to the laser system as wavelength, power, emission mode, exposure time. Which all can determined the laser effect on biological tissues [10].

The aim of this study was to specify the effects of using the erythrosine stain with 3% concentration as exogenous chromophores in combination with diode 940 nm laser on lateral damage of tissue, incision time, quality and regularity of incision margin, in order to determine the desired effect with minimal unwanted thermal damage. The incision time, In this study we measured exposure time for each incision with (sportline, model 240 stopwatch, China) as criteria of Abdul Jaleel et al. for time measurement [12].

This decrease in the time can be explained as the infra-red laser beam is highly absorbed by targeting oral soft tissue chromophores as hemoglobin and melanin which are exist internally within the tissue and by dark pigments (erythrosine) that we are applied externally on the tissue [14].

The histological evaluations of the depth and width of incisions and lateral damage of tissue was according the measurement criteria of Vaderhobli R et al. and Wilder Smith et al. [15,16]. As they compared the effect of using different power and pulse duration of CO2 laser on incisions properties and on lateral tissue damage. In our study the histological analysis was to assist the effect of erythrosine stain used as exogenous chromophores with diode 940 nm laser on the depth and width of incisions and on lateral tissue damage. The result of this study showing that there is increase in the depth and width of incisions with erythrosine group but this increase is not significant statistically, but the extension of damage vertically and horizontally appeared to be decreased significantly, which is in agreement with of Agrwal et al. study [8], but they used three stains, different power and different analysis tools.

The difference in depth and width along with decrease in lateral tissue damage of erythrosine group, is interpreted as for this group the incision start immediately when the laser beam being in contact with tissue, as exogenous chromophores act a light receptor for specific wavelength [17]. So the pigments absorb laser beam energy and decrease the scattering effect and lead to focusing of energy on specified area with little lose [18].

The assessment of histological variables for incisions quality and regularity of incision margins are assessed based on the criteria established by Azevedo et al. [19], they studied the regularity and quality of incisions made by different laser wavelengths in tongue tissue. They base was the core, cytoplasmic and membrane modifications considered as epithelial changes, With possibility of intraepithelial and subepithelial adhesion loss, the dissection and charring is connective tissue modification. Regularity and quality of incision margin was assessed on the scale of 0 to 4. Classified as 0 represent the worst incisional quality score, (≥2) regular, when the incision margin appear mostly with a smooth linear border, (<2) in the presence of a rough and uneven edge in most of the incision, while 4 represents the highest quality of incisions [20].

The regularity analysis show of this study show that the highest incision quality was for erythrosine group, which are in agreement with result of Agrwal et al. their analysis for quality and regularity was assessted by profilometer and also the result is confirmed with Azevedo et al. statement that as the incision is more regular is corresponded with lower extension of lateral damage vertically and horizontally. As the incision appeared with regular, smooth and well defined margins, is because longer wavelength being maximally absorbed by water based chromophores exhibit a sharp configured interaction with little sub surface disruption [21]. As the relationship between exposure time, absorption, and thermal damage, state the selection of proper wavelength that matching existing chromophores weather it present endogenously inside tissue like melanin and hemoglobin or artificial pigments added exogenously [22]. For more evaluation in the future study, we suggest use of different concentration of stain, use another biologically compatible stain, use another laser wavelength and use an animal vivo study.

According to the result of this in vitro study, decreasing the incision time, making incision with more regular margin and minimizing thermal collateral damage can be achieved through using erythrosine stain 3 % as exogenous chromophores with diode laser for cutting oral soft tissues.