Cellulase generated by cellulolytic bacteria helps to degrade the cellulose. This enzyme is considered a major industrial enzyme group and has several industrial applications. The bioconversion of renewable cellulose biomass to commodity chemicals is a potential challenge area where cellulase plays a central role. Marine Streptomyces species are drawing more and more attention as a promising source of new natural products. Oxidation causes Endothelial stress which is ultimately involved in endothelial dysfunction, which is obvious in adults with different cardiovascular conditions, including thalassemia. The sediment sample was collected from the Thondi area, Tamilnadu. The collected sample was sun dried for 48 hrs. and turned into fine powder by mortar and pestle. The actinobacteria was isolated and identified the marine actinobacteria with the help of aerial mass colour, melanoid pigments, reverse side pigments, soluble pigments, and spore chain morphology. Chemotaxonomic characteristics and scanning of cellulase production were done and showed potential antioxidant properties. The effect of pH and temperature on cellulase enzyme production were analysed and their potential antioxidant properties also done.

The most important agricultural waste in the world is cellulose and is an abundant natural biopolymer. This cellulosic biomass is a rich, renewable resource with a high bioconversion potential to value-added products [1]. Cellulase generated by cellulolytic bacteria helps to degrade the cellulose. This enzyme is considered a major industrial enzyme group and has several industrial applications [2]. Moreover, in the textile industry, the most important industrial application of cellulases is biopolishing textiles and stoned denims as well as laundry detergents for home laundry in order to improve fabric softness and shine [3]. In addition, they are used in animal feed for improved nutritional quality and digestibility, fruit juice processing as well as in the baking process [4]. The bioconversion of renewable cellulose biomass to commodity chemicals is a potential challenge area where cellulase plays a central role [5].

Marine Streptomyces species are drawing more and more attention as a promising source of new natural products [6]. Actinomycetes bacteria of genus Streptomyces are one of the most promising biological sources for new natural products and will continue, at least for the near future [7]. The intensive investigation of terrestrial actinomycetes in 1950-1970 did lead to the frequent reconstruction of bioactive compounds, attracting attention to new, ecological niches that could have been sources of new actinomycetes [8].

As the sea accounts for more than 70 percent of the surface of the world and hosts about 87 percent of the world's biodiversity, the findings of new microorganisms, including actinomycetes, appear largely undeveloped. Given the never seen diversity of marine organisms and the relatively little work done to date, more than 25000 new marine natural products have now been identified as astounding [9]. Many such compounds come from deep sea sediments, coral reefs, aquatic invertebrates and plants isolated from marine actinomycetes [10,11].

Various marine actinomycetes compounds have a significant potential to become pharmaceutical drugs. Diazepinomicin, a marine micromonospora dibenzodiazepine alkaloid, has had antibacterial and antitumor activities, and had glioblastoma treatment clinical studies in Phase II [12,13].

Some important papers which were done by the researchers helped in this study. Some of them are regarding the antioxidant [14,15], anti-inflammatory [16,17] and antidiabetic properties [18-20]. Papers about anticancer were also [21,22] helpful.

As toxic and beneficial compounds, free radicals and oxidants can play a dual role, since they can be damaging or helpful for the body. The development of many human diseases has been involved. Among them, arthritis, inflammatory diseases, kidney diseases, cataracts, inflammatory bowel disease, colitis, lung dysfunction; pancreatitis are the most common [23]. Oxidation causes endothelial stress which is ultimately involved in endothelial dysfunction, which is obvious in adults with different cardiovascular conditions, including thalassemia [24]. Red blood cells are protected against oxidant damage by antioxidants and other supportive treatments [25]. Further, our team has extensive knowledge and research experience that has translated into high quality publications [26-46]. This study aims at isolation of cellulase producing marine Streptomyces sp. from sediment samples and their antioxidant properties.

The sediment sample was collected from the Thondi area, Tamilnadu. The collected sample was sun dried for 48 hrs. and turned into fine powder by mortar and pestle.

The colour of the mature sporulating aerial mycelium was recorded in naked eye. When the aerial mass colour fell between two colours series, both the colours were recorded. If the aerial mass colour of a strain to be studied showed intermediate tints, then also, both the colour series were noted. The media used were Yeast Extract-Malt Extract Agar and Inorganic-Salt Starch Agar.

The grouping was made on the production of melanoid pigments (i.e. Greenish brown, brownish black or distinct brown, pigment modified by other colours) on the medium. The strains were grouped as melanoid pigment produced (+) and not produced (-). In a few cases, the production of melanoid pigments was delayed or weak, and therefore, it was not distinguishable. This is indicated as variable (V). This test was carried out on the media ISP-1 and ISP-7 (Appendix I), as recommended by the International Streptomyces Project (Shirling and Gottlieb, 1966).

Spore morphological characters of the strains were studied by inoculating a loopful of one week old cultures into solidified agar medium contained sterile glass slide. The cultures were incubated at 28 ± 20oC and examined periodically for the formation of aerial mycelium, sporophore structure and spore morphology.

Spotting of the whole cell hydro lysates was made carefully on TLC plate using a microliter pipette. Spots were 5-10 mm in diameter. This was done by multiple applications on the same spot of very small portions of the sample, which were dried by a hand dryer.

Each sample (3 μl) was applied on the baselines of the TLC plate (20 cm x 20 cm). Adjacent to this, 1μl of DLdiaminopimelic acid (an authentic material mixture of DAP isomers) and 1μl of amino acetic acid (glycine) were spotted as standards. TLC plate was developed with the solvent system containing methanol: pyridine: glacial acetic acid: H2O (5: 0.5: 0.125: 2.5 v/v). It took approximately more than 4 h for development. The spots were visualized by spraying with 0.4% ninhydrin solution in water-saturated n-butanol, followed by heating at 1000 C for 5 min. Spots of amino acids ran faster than DAP. The sample spots were immediately compared with the spots of the standards since spots gradually disappeared in a few hours.

On a cellulose TLC plate (20 cm x 20 cm), 5μl of samples was spotted along with 3 μl of sugar solutions as standards on the same plates. Galactose, arabinose, xylose and madurose were the sugars, which were used as standards. TLC plate was developed with the solvent mixture containing ethyl acetate: pyridine: acetic acid: distilled water (8: 5: 1: 1.5 v/v). The developing time was more than 4 h. Spots were visualized by spraying with aniline phthalate reagent (3.25 g of phthalic acid dissolved in 2 ml of aniline and made upto 100 ml with water saturated n-butanol). The sprayed plate was heated at 1000 C for 4 min. Hexoses appeared as yellowish brown spots and pentoses, as maroon coloured spots.

The ability of the actinobacterial strain in utilizing various carbon compounds as source of energy was studied, following the method recommended by International Streptomyces Project (Shirling and Gottlieb, 1966). Chemically pure carbon source certified to be free of admixture with other carbohydrates and contaminating materials were used for this purpose. Carbon sources for this test were Arabinose, Xylose, Inositol, Mannitol, Fructose, Rhamnose, Sucrose and Raffinose. These carbon sources were sterilized by ether sterilization without heating. The media and plates were prepared and inoculated according to the convention of ISP project (Shirling and Gottlieb, 1966). For each of the carbon sources, utilization is expressed as positive (+), negative (-), or doubtful ( ± ). In the 'doubtful ' strains, only a trace of growth slightly greater than that of the control was noticed.

Cellulase activity of the strains was screened qualitatively in CMC (Carboxymethyl Cellulose) agar medium. After inoculation, the plates were incubated at 37oC for 5 days. To visualize the hydrolysis zone, the plates were flooded with an aqueous solution of 0.1% Congo red for 15 min and washed with 1 M NaCl. To indicate the cellulase activity of the organisms, diameters of clear zones around colonies on CMC agar were measured.

The medium was inoculated with 1 ml of spore suspension of a 7 days old culture and incubated in rotary shaker (150rpm) at ambient temperature for three days. The cell free supernatant was collected by centrifugation at 12,000rpm for 15 min. The supernatant was the enzyme source. The substrate 2% of carboxymethyl cellulose solution (CMC) was prepared with a 50mM phosphate buffer (pH 7). 1ml of crude enzyme was added with 1ml of CMC solution which incubated for 60min at (50ºC) desired temperature. After incubation 2ml of 3, 5-dinitrosalicylic (DNS) reagent was added to terminate the enzyme reaction. After termination of enzyme activity all samples should be incubated for 5min at boiling temperature then the samples transferred to an ice cold water bath. After pulp settlement, the aqueous layer was e by centrifuge (12000 rpm/min for 5min at 4ºC) and the optical density was measured at 540nm. One International Unit (IU) of enzyme activity for cellulase was defined as the amount of enzyme releasing 1 μmol reducing sugar from CMC per minute using glucose as standard.

Effect of pH on enzyme production

The isolates were inoculated in CMC broth and the medium pH was adjusted from 6 – 8. The confirmation of growth was observed at 600nm. The enzyme production was quantified by the method described before.

Effect of Temperature on enzyme production

The rise of widespread antibiotic- resistant bacteria heightened the need to discover new antimicrobial agents. Actinomycetes, especially Streptomyces sp., have attracted a lot of attention because they produce a lot of useful bioactive metabolites. Isolating these species from less -explored environments may improve the chances of discovering new microbial species. Isolation of cellulase producing Streptomyces from marine sediments sample and effect of physical factors on enzyme production (Tables 1-5). This study isolated marine actinobacteria from a sediment sample and identified Streptomyces genus from the isolate using specific characteristics of the bacteria. Then the production of enzyme was confirmed by screening for cellulase and enzyme assay was carried out. The enzyme assay revealed that the Carboxymethyl cellulase agar flooded with iodine, the total activity of the enzyme was 127.41 IU/mg. The effect of temperature and pH enzyme production was studied on CMC broth. It was found that the optimum pH and temperature for maximum enzymatic activity was and respectively. It was also observed that as the temperature increased, the enzymatic activity increased. However at the highest temperature, the rate decreased again which might probably be due to enzyme degeneration. Finally, antioxidant testing was performed which showed positive results (Figures 1-2).

Table 3: Depicts the effect of pH and effect of temperature. 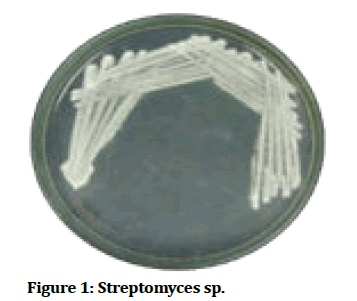 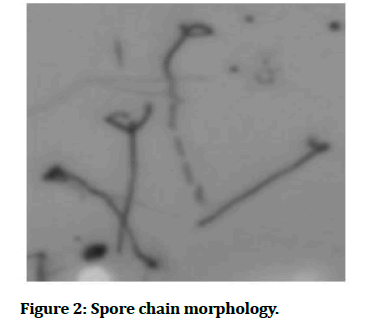 This research was supported by the Department of research of Saveetha Dental College. We thank our colleagues who provided insight and expertise that greatly assisted the research.