Knowledge and Attitudes towards Cardiopulmonary Resuscitation among Dental Students in Abha, Saudi Arabia

Background: Sudden cardiac arrest is a major public health problem in the world. Immediate initiation of high-quality cardiopulmonary resuscitation (CPR) significantly increased patient survival rate. Therefore, it is very important to train young people and increase public awareness of CPR for the long-term benefit of the community. Objectives: To assess the knowledge and attitudes towards cardiopulmonary resuscitation (CPR) among the dental students of College of Dentistry King Khalid University Abha, Saudi Arabia. Materials and Methods: A cross-sectional study was carried out on the sample size of 250 Male dental Students of College of Dentistry King Khalid University Abha, Saudi Arabia. A self-administered questionnaire was prepared in both Arabic and English languages and distributed to all the participants. All the data were collected and analyzed by using SPSS version 21. Results: The majority of participants, 124 (60%) were said that they have knowledge about cardiopulmonary resuscitation. 28% agreed that they had ever encountered a situation that required the use of CPR. Half of the participants agreed that they have sufficient knowledge of CR. 75% of the dental students said that they attended training course of CPR. When asked about the performing CPR is more harmful to the patients rather than being beneficial, majority of participant's (64%) did not agree with this. Conclusion: The results of this study demonstrate good CPR knowledge dental students. However, participants reported overwhelmingly positive attitudes and eagerness towards the implementation of CPR training. Further research needs to be done to establish CPR skill proficiency.

Cardiopulmonary resuscitation (CPR) is a lifesaving technique that will be helpful in numerous emergencies. Cardiopulmonary resuscitation is vital in conditions of suffocation, near-drowning, electrocution injuries, heart attacks, or any circumstance in which a person's breathing or heartbeat has ceased. This requires a combination of rescue inhaling and exhaling and chest compressions, which maintain oxygenated blood flowing to the mind and other vital organs until more definitive medical treatment can recover a normal heart rhythm. When the heart stops, the absence of oxygenated bloodstream can cause irreparable brain damage in mere a couple of minutes. Death will happen within ten minutes [1]. Time is crucial when helping an individual in cardiopulmonary arrest. The sooner CPR is carried out, the better the chance of successful resuscitation.

Several types of research have demonstrated that 3%-12% of most acute myocardial infarction (MI) cases produce ventricular fibrillation (VF) leading to SCD, and as many are found to be dead, the number is considered to be higher [2,3]. Nevertheless, ventricular fibrillation (VF) as a reason behind out-of-hospital cardiac arrest will be reduced, and VF is still the most frequent underlying ventricular arrhythmia in SCDs [4,5]. Techniques of CPR are targeted at sustaining the oxygenated blood flowering to vital organs, specifically the brain, which will be very sensitive to the lack of oxygen that can trigger permanent brain injury within just a short while, and death may happen in under 10 minutes. Every minute after the beginning of sudden cardiac arrest will reduce the benefit of resuscitation by around 10% [6].

Sudden cardiac death (SCD) is a frequent and devastating event, often developing in the first age of one's life. SCD will be regarded as to be the most common and leading reason behind death outside the hospital worldwide. In the USA, based on one study, the incidence of SCD was found to be 300,000-450,000 each year. Experts also found that the peaks of SCD are bimodal, developing at the age group of infancy and after the age of 45. In the USA, the majority of 50% of adults who have problems with SCD were discovered to have coronary heart disease (CHD). One study was done on New Zealand's high-school students to evaluate the level of the knowledge of the students towards CPR. The students demonstrated an unhealthy knowing of resuscitation; only 22% of them understood what CPR means [7]. In accordance with one research on King Saud University students in Riyadh, Saudi Arabia, it found that 31% of the college students had no idea about CPR, 85% felt that their knowledge was weak, and 10% assumed that their understanding was good [8]. This study aimed at estimating the level of knowledge and attitude towards cardiopulmonary resuscitation (CPR) among the dental students of College of Dentistry King Khalid University, Abha, Saudi Arabia.

A cross-sectional study was carried out on the sample size of 246 male dental students to determining the degree of knowledge and attitude towards cardiopulmonary resuscitation (CPR) in College of Dentistry King Khalid University. Informed consent was obtained from the participants before start of the research. The sampling method included in the study is simple random sampling method. Ethical approval for performing the survey was obtained from the Institutional review board of College of Dentistry King Khalid University.

The questions were designed and were circulated among dental students. The questionnaire consists of two parts: The first portion included the questions related to the demographic information of participants, such as age, gender, educational qualification.. The other part of the questionnaire comprised of 10 questions with ‘yes’ and ‘no’ pattern, and the multiple-choice question was prepared, and piloting was done.

A self-administered structured questionnaire was developed and tested among a convenience sample of 20 dental surgeons. They were interviewed to gain feedback on the overall acceptability of the survey in terms of length and language clarity; according to their feedback, the questions were corrected. Face validity was also assessed before the start of the study. Both descriptive and analytical statistical measurements were used to describe the main variables by SPSS 18 (IBM Corporation, Armonk, New York, USA) software.

A total of 206 male dental students responded to the questionnaire. 56% of study subjects were of < 25 years, 34% were of 26-30 years, 7% were of 31-35 years, and 3% were >36 years (Table. 1). Knowledge and attitude among dentists towards cardiopulmonary resuscitation were shown in Table. 2. The majority of participants, 124 (60%) were said that they have knowledge about cardiopulmonary resuscitation. 28% agreed that they had ever encountered a situation that required the use of CPR. Half of the participants agreed that they have sufficient knowledge of CR. 75% of the dental students said that they attended training course of CPR. When asked about the performing CPR is more harmful to the patients rather than being beneficial, majority of participant's (64%) did not agree with this. Very a smaller number of participants 20% agreed that performing CPR is simply a waste of manpower and time. 75% of participants agreed guidelines for CPR can improve the quality of healthcare. Responses of participants were given in Figure 1.

Table 1: Distribution of study sample according to age. 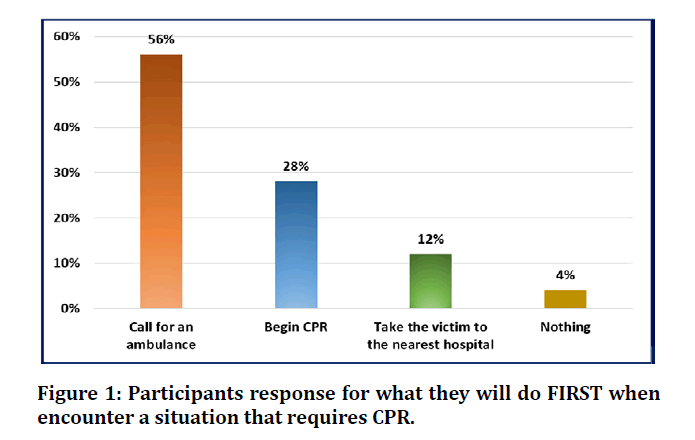 Figure 1: Participants response for what they will do FIRST when encounter a situation that requires CPR.

Cardiopulmonary resuscitation is an important life-saving skill that needs to be educated to all members of the community. While CPR can save a life, its timely, effective, and highquality administration is really important in connection to the outcome. Healthcare professionals, including emergency medical technicians, paramedics, and even qualified bystanders, are likely to respond and deliver CPR. However, issues with preserving knowledge and skills and outdated information have to be identified and addressed. Additionally, it is safe to say that a doctor’s perspective and ethical views can also dictate their CPR management. Nearly all participants, 124 (60%), were told they have an understanding of cardiopulmonary resuscitation. 28% agreed they had ever experienced a situation that required the usage of CPR., which demonstrates the crucial role that healthcare organizations play in teaching the general public about CPR. A similar lack of information was within research in Sweden, which exhibited that students scored around 67% directly after training and up to 61% at 6 months [9]. A study in the UK agreed with this participants’ opinion that improving the level of training within the community might enhance the proportion of patients with out-of-hospital cardiac arrest (OHCA) who obtain CPR before the arrival of the EMS [10]. Inside our research, 75% of the dental students said that they went to the training course of CPR. European Resuscitation Guidelines and another study from Norway emphasized the importance of practical training in CPR to fortify the participants’ self-efficacy and raises willingness to intervene in a real OHCA situation [11]. This should be considered when designing such courses for laypersons in Saudi Arabia, and emphasis shall be given to the practical facet of training.

In this study, 75% of participants agreed guidelines for CPR could improve the quality of healthcare. Universities were the primary source of BLS training and accompanied by schools, specific training facilities, and information. Today, more CPR training center programs are open by medical organizations in Saudi Arabia, as the Saudi Red Crescent Authority, to the general population for free to enhance the knowledge and proficiency of the general public in the application of this life-saving skill. Research from the UK exhibited that training had a direct effect on the attitude of individuals toward CPR [12]. Another study conducted on nurses had also shown that their mindset was improved after training [13]. In Saudi research, it had been discovered that attitude toward CPR could possibly be enhanced by frequent educational programs [14]. Another Saudi research conducted on students documented that their overall attitude was positive toward CPR [15]. On the other hand, the majority of students in this research wanted to know CPR (88.5%), and this is a good, positive attitude between them. Also, this result is in compliance with another study conducted in New Zealand, which found nearly the same results (73.5%) and with a study that was carried out in Riyadh, 2008, which showed better mindsets (90%). These results reflect the importance of a CPR training program for university students and their benefit to them. One of the studies done in Riyadh, which exhibits that about half of the students believe that the media such as television and social media is the greatest way to raise the awareness of people [16]. On the other hand, today's study shows that there are substantial increases in knowledge, attitudes, and practices regarding CPR among dental students at King Khalid University, which is because their college curriculums will help them and increase their aware usually regarding CPR, and there are no other studies accomplished to support this result [17]. Previous contact with cardiac arrest cases significantly influenced the CPR knowledge of health professionals. Anyone who has been exposed to cardiac arrest situations was more knowledgeable than those people who have not been uncovered, which is in agreement with the outcomes of a Nepal study on BLS knowledge and attitude of doctors. This might be because knowledge can be acquired from repeated exposures to cardiac arrest case management and experience. It is vital to standardize training in BLS as well as adult life support (ALS) and make it a necessary component of all medical, nursing, and paramedical school undergraduate curriculum. Zamir et al. showed that attending a CPR class includes a positive effect on theoretical knowledge [18]. The teachers, school students, public, and all laypersons from a community should also be educated for BLS and medical so that they can react to a crisis correctly. Short refresher courses can end up being arranged for individuals who previously have taken a course formerly to spare the funding and guarantee revision. Chaudhary et al. demonstrated how hands-on coaching improved the data and techniques by comparing pre-test assessment and post-workshop scores [19].

Limitations of this research include the small sample size and the fact that it was limited by one university. Larger sample sizes and inclusion of various universities, both governmental and also private, might provide more info. More studies are essential to evaluate CPR and medical knowledge in the community. Further research can be needed to assess the strengths and weaknesses of CPR training programs.

In conclusion, the overall awareness of CPR was good. However, it was demonstrated a positive attitude and eagerness towards the implementation of CPR training. Future research should focus on the barriers to attain CPR training and the effectiveness of the available CPR training programs.