Recently, there has been a rise in the number of adult patients looking for orthodontic treatment with requirements regarding the duration of treatment and esthetics. Periodontal accelerated osteogenic orthodontics (PAOO) or Wilckodontics is a clinical procedure that combines selective alveolar corticotomy, particulate bone grafting, and the application of orthodontic forces. This procedure is theoretically based on the bone healing pattern known as the regional acceleratory phenomenon (RAP). PAOO results in an increase in alveolar bone width, shorter treatment time, increased post treatment stability, and decreased amount of apical root resorption.

The periodontium consists of the investing and supporting tissues of the tooth (gingiva, periodontal ligament, cementum and alveolar bone) [1]. The alveolar wall is surrounded by the supporting bone with which it forms an anatomical unit. The supporting bone includes the buccal and oral cortical plates and the septa. After the eruption period, the relationship between the teeth and their supporting structures remains dynamic, as the former migrate spontaneously within the alveolar process. This implies adaptation mechanisms preserving the anchorage to bone and the integrity of the periodontal ligament, which is a source of progenitor cells renewing the tissues [2].

An increasing number of adult patients are seeking orthodontic treatment [3]. These patients have different requirements regarding duration of treatment, concerns regarding facial and dental aesthetics, and types of appliance that can be used. Growth is an almost insignificant factor in adults compared to children, and there is increasing chance that hyalinization will occur during treatment. Also, cell mobilization and conversion of collagen fibers is much slower in adults than in children. Finally, adult patients are more prone to periodontal complications since their teeth are confined in non-flexible alveolar bone [4]. The introduction of corticotomyassisted orthodontic treatment (CAOT) opened doors and offered solutions to many limitations in the orthodontic treatment of adults. The new technique described here provides an increased net alveolar volume after orthodontic treatment. This is called the periodontally accelerated osteogenic orthodontics (PAOO) technique. It is a combination of a selective decortications facilitated orthodontic technique and alveolar augmentation [5]. This procedure has several advantages such as reduced treatment time, enhanced expansion, differential tooth movement, increased traction of impacted teeth and an increased post orthodontic stability. With the help of this technique teeth can be moved 2 to 3 times further in 1/3rd to 1/4th the time required for traditional orthodontic therapy [5].

One of the main disadvantages of conventional orthodontic treatment is time, requiring more than 1 year for completion. There are three options to shorten the time of treatment: (i) Local administration of chemical substances, (ii) Physical stimulation (i.e., electrical current or magnets), and (iii) Surgery (i.e., alveolar corticotomy, compression, or distraction). This technique of Wilckodontics involves the removal of a portion of cortical bone just enough to initiate a local response known as the Regional acceleratory phenomenon (RAP) and should not create movable alveolar segments. Orthopedist Harold Frost recognized that surgical wounding of osseous hard tissue results in striking reorganizing activity adjacent to the site of injury in the surgical procedure. He collectively termed this cascade of physiologic healing events the Regional Acceleratory Phenomenon (RAP) [6, 7]. Following surgical wounding of cortical bone, RAP potentiates tissue reorganization and healing by way of a transient burst of localized hard and soft tissue remodelling [8]. This is an intensified bone response (increased osteoclastic and osteoblastic activity, and increased levels of local and systemic inflammation markers) in areas around cuts that extend to the marrow. The duration of RAP depends on the type of tissue, and usually lasts about 4 months in human bone. This phenomenon causes bone healing to occur 10–50 times faster than normal bone turnover [9].

Surgical injury causes transient osteopenia in alveolar bone (i.e., a temporal and reversible decrease in bone mineral density) [10]. This reduces the biomechanical resistance and enables rapid tooth movement through trabecular bone. This phase of transient osteopenia can be prolonged with loading orthodontic application. This is why it is essential to adjust the orthodontic appliance every 2 weeks [11].

An 18-year-old female patient (Figures 1A to Figure 1N) presented with forwardly placed upper front teeth. On extra-oral examination, the patient had an apparently symmetrical mesoprosopic face form and potentially competent lips with a resting lip separation of 5mm. The upper and lower lips were protrusive. On profile examination patient had a convex facial profile. The smile of the patient was symmetrical and consonant with excessive maxillary incisor display. The estimated length of treatment using conventional orthodontics was 1.5 to 2 years. The patient was esthetically conscious and was not receptive to undergo orthodontic treatment for 2 years. When the patient was explained the new treatment option which would include selective decortication and use of bone grafting material with reduction in the duration of orthodontic treatment to a period ¼ to 1/3 of the time needed for conventional orthodontic treatment, she readily accepted the treatment method.

Figure 1A: Pre-treatment view of the patient (Case 1). 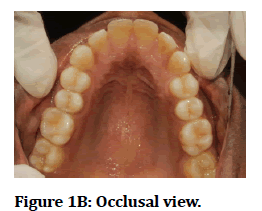 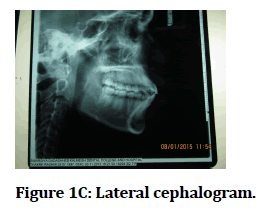 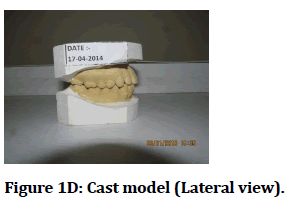 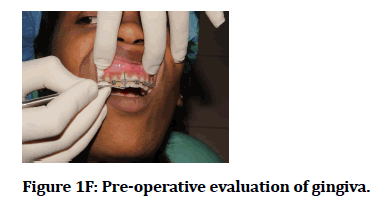 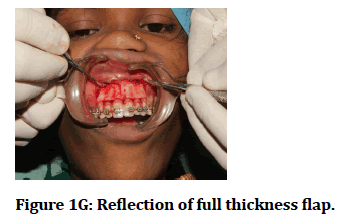 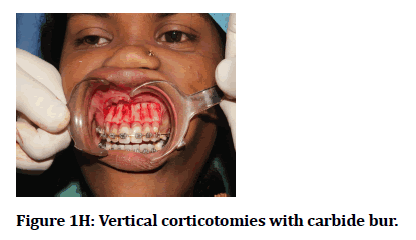 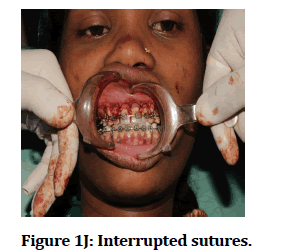 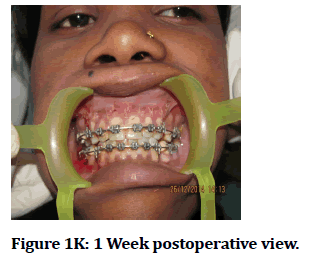 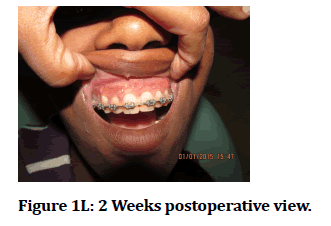 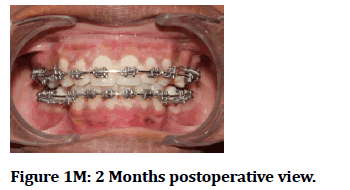 There was sufficient amount of attached gingiva on the facial surfaces of maxilla and mandible. However, due to the prominence of the roots there was a reduced amount of alveolar housing facially. The orthodontic treatment plan included maxillary and mandibular braces and an anchorage preparation for preventing the upper and lower molars from drifting forward and maintaining their position following tooth movement. The intervals for the orthodontic adjustments averaged 2 weeks, ranging from 1 to 3 weeks. From bracketing to debracketing the time period for orthodontic treatment was 6 months and 2 weeks, with 12 orthodontic adjustment appointments. Fixed retainers were placed immediately following the removal of the braces.

A 20-year-old female patient reported with the chief complaint of forwardly placed upper front teeth. On extra-oral examination the patient had an apparently symmetrical Europrosopic face form and potentially competent lips with a resting lip separation of 4mm. The upper and lower lips were protrusive. On profile examination patient had a convex facial profile. The smile of the patient was symmetrical and non-consonant with excessive maxillary incisor display.

Figure 2A: Pre-treatment view of the patient (Case 2). 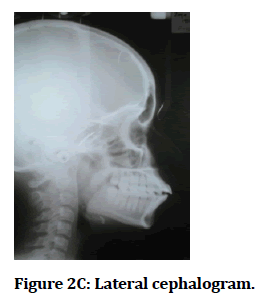 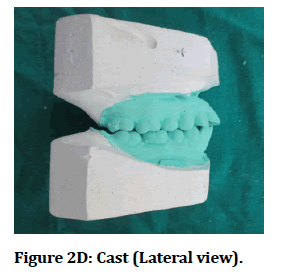 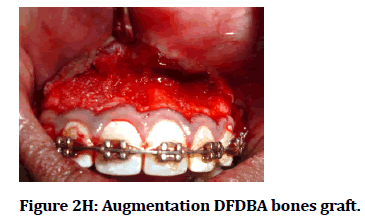 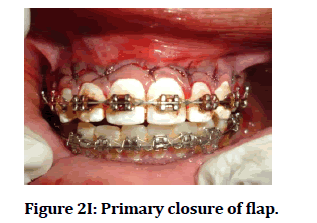 Figure 2I: Primary closure of flap. Orthodontic braces were placed on both the patients and alignment and levelling was done during the week preceding the surgery. The forces used for orthodontic movement were within normal range. The Wilckodontics procedure was performed under local anesthesia and on both maxillary and mandibular arches at 2 different appointments scheduled 15 days apart in both the patients. Sulcular incisions were made after which full thickness mucoperiosteal flaps were reflected on the buccal aspect of anterior teeth from mesial aspect of Right First Pre-molar to mesial aspect of Left First Premolar in both maxilla and mandible. Special care was taken not to perforate the flap and to retract the flap for proper visibility. The reflection of the flap was beyond the apices of the teeth. After flap reflection, selective decortication was carried out with the help of carbide bur and copius saline irrigation, bucally in maxilla and mandible. Selective decortication was performed vertically between the roots of the teeth which involved several perforations in the cortical layer with 2mm of bone left from the alveolar crest. The cortical bone was perforated just to penetrate the marrow and induce bleeding points.

Following selective decortication, bone augmentation was performed with DFDBA bone graft over the decorticated areas which have potential inductive properties. Bony fenestration and dehiscences were observed in both the patients due to the protrusion of the teeth and root prominences. Excessive amounts of bone grafting were not done to achieve complete primary closure of the flap. The mucoperiosteal flaps were then sutured with 5-0 Vicryl resorbable sutures with preservation of interdental papilla in both the patients. Patients were recalled after 2 weeks for suture removal and orthodontic adjustments and subsequently every 2-3 weeks for orthodontic adjustments. From bracketing to debracketing in patient 1 was 6 months, with 13 orthodontic adjustment appointments; patient 2 was completed in 6 months and 2 weeks, with 12 orthodontic adjustment appointments. Removable retainers were placed immediately following the removal of the braces. Patients were recalled for periodontal check-up once a month and the patient did not have any complaints. Probing pocket depths were less than 3mm, interdental papillae were preserved, teeth were vital, any bone loss or root resorption apically on the radiograph or gingival recession. The patients were satisfied with the aesthetic results of the treatment procedure.

The procedure of Wilckodontics is advantageous than the conventional orthodontic treatment as it takes lesser time to achieve the results. There is less evidence of root resorption and history of relapse. It has been claimed that orthodontic treatment progresses faster and the results are more stable after corticotomy with minimal risk of complications [12]. Corticotomy with subsequent bone augmentation has been proposed to increase the volume of the alveolar process, to facilitate arch development, to prevent or even treat fenestrations, and to maximize the metabolic response during orthodontic treatment. Corticotomy-facilitated orthodontics has been indicated for nonextraction treatment of crowding, shortening treatment duration, borderline orthognathic surgery patients, extrusion of ankylosed teeth, intrusion of posterior teeth to close anterior open bites, faster canine retraction in extraction patients and impacted canines [13]. Contraindications include patients with severe active periodontal disease, inadequately treated endodontic problems, patients on long term medications which will slow down bone metabolism, such as bisphosphonate and NSAIDs and patients on long term steroid therapy due to presence of devitalized areas of bone and patients with inadequate width of attached gingiva [14].

Kanno et al. described a CO procedure used to treat a case of severe open bite, moving the upper posterior bone–tooth segments 7 mm in a superior position. They used anchor plates and elastics three weeks after surgical intervention in two stages. Satisfactory results were obtained after 6 months of orthodontic treatment [18]. Dibart et al. described a tunnel approach with piezoelectric bone cuts. Several vertical incisions are distributed on the attached gingiva through piezo-electric vertical corticotomies. The tunneling approach allows placement of the bone graft. A case of mild crowding was solved within 17 weeks of active treatment with this approach [19].

Studies [20] comparing the rate of tooth movement showed that the tooth movement peaked at 22-25 days and then decelerated. During this three week period, corticotomy facilitated side moved twice than the control side. Similar results were obtained in a study [21] conducted in adults to retract maxillary canines following premolar extractions. Based on the outcome of these studies the length of RAP was probably four months, after which the rate of tooth movement returns to normal.

In support of wilcko’s concept, published data [23] claims that bone grafting enhances the stability of orthodontic treatment results. Some cases report a greater volume of bone in Computed tomographic Scan. However is the new bone incorporated into native cortical –plate, or is it fibroosseous material encapsulated on the outside of the cortical plate was evaluated. The scans suggest that it is a fibroosseous encapsulation [23]. Moreover a distinct disadvantage of this procedure is the additional cost, invasive nature and morbidity associated with the surgery [23].

The procedure of Wilckodontics has made adult orthodontics a reality. The treatment can be accomplished within a shorter period of time which is attributable to the Regional Acceleratory Phenomenon (RAP). The use of this procedure avoids secondary effects of conventional orthodontic treatment such as root resorption or periodontal dehiscence. This technique also shows increased alveolar thickness due to the inclusion of bone grafts, better post orthodontic stability and less incidence of root resorption when compared to conventional orthodontic treatment. As Wilckodontics is a relatively newer procedure long term follow up studies with increased sample size is required to further authenticate this procedure into surgical orthodontics.