Methods: This study is a randomized prospective study. Infertile Patients with PCOS or unexplained subfertility were recruited from couples following with the infertility unit at Al-Moosa Hospital in Al-Ahsa in the Kingdom of Saudi Arabia. Randomization is done to use either clomiphene or letrozole. On the hCG trigger day and the mid-luteal day, we compared sub endometrial arteries and uterine artery doppler markers, Applebaum scoring system, endometrial thickness and blood vessels flow, the pattern between positive and negative test groups.

Conclusions: On the trigger day, uterine artery PI and RI, Applebaum scoring system and endometrial thickness was predictive of pregnancy. Endometrial pattern and vascularity on the mid-luteal day are correlated with positive pregnancy success rate.

The main use of sonography in subfertility is follicular diameter monitoring. Unfortunately, the use of doppler sonography is still uncommon due to many factors such as the need for good training and insufficient studies justifying its use in infertility. We aim to increase doppler use by proving its advantages in infertility and ovulation induction. The most used treatments for ovulation induction are clomiphene citrate and letrozole. Although there is debate on which one is better in oral ovulation induction, most studies favour letrozole over clomiphene citrate [1]. Mainly, clomiphene works through antagonizing estrogen receptors [2]. Estrogen receptors antagonization will stimulate the hypothalamus-pituitary axis to increase the secretion of gonadotrophins [3]. Even it causes extremely high ovulation rate; its pregnancy rate is low. Endometrial thinning with its use may be the reason for that [4] besides decreased quality and quantity of cervical mucus [5]. However, suppression of androgen aromatization is the mode of the main action for letrozole. This action will cause low estrogen production, which in turn causes positive feedback on the hypothalamuspituitary axis. Increased gonadotropin levels will stimulate follicular growth. It is suggested that higher endometrial diameter is associated with better pregnancy rate [6].

To assess ultrasound doppler use in the management of subfertile couples.

We did a randomized prospective comparative study. All couples were given detailed information about the study, and their permission was insured through informed consent, and they sign for that. The ethical committee of Al Moosa Specialist Hospital gave our study ethical approval. The infertile couples' cases were collected from the outpatient department in the IVF unit of Al Moosa Specialist Hospital.

Uterine distortion due to anomalies or surgeries.

Pituitary or hypothalamic causes of hypogonadism.

Non-responsive cases or cases with early ovulation (before triggering).

Using 2003 Modified Rotterdam consensus, we diagnose PCOS [7] and all doppler sonography studies were done by the same doctor to avoid the inter-observer variability. The ultrasound machine used was GE Voluson P80 with a transvaginal probe of 5-9 MHz.

Randomization was done into two groups

Group A: group induced with clomiphene.

Group B: group induced with letrozole.

No coffee, tea, smoking, medications, or herbal products were allowed within 6-8 hours before each sonography study. All studies were done with lithotomy position and an empty bladder. Letrozole was given starting from the third day of the periods with an amount of 2 tablets once daily for five days while we gave two tablets of clomiphene citrate once daily for five days from the third day of the cycle.

A basic vaginal sonography study was done at day two or three of the period to assess pelvic structures and to do randomization of induction treatment.

The criteria for triggering was when the leading follicle reaches 18 mm in size or more. the follicular size was assessed using the mean of two diameters intersecting at right angles [8].

Triggering was done using intermuscular 10000 units of Choriomon or Pregnyl in the morning of the same day. Timing of coitus was doubled to be at 1 and 1.5 days from triggering.

We cancelled the cycle all follicles are less than 12 mm at 16 days from the start of the period. On the trigger day, we did a sonographic study of the endometrial diameter, pattern, blood vascularity, Applebaum receptivity scoring system, uterine and sub endometrial arteries PI and RI.

The endometrial diameter assessment was done at the widest thickness at the median plane, on the external edges from side to side.

Type "A": Endometrial hyperechogenic with no visible midline.

Type "B": endometrial myometrial-like echogenicity with no visible medline.

Endometrial and sub endometrial vascularity was studied on the hCG trigger day and about seven days post ovulation.

Zone one: blood flow surrounds the outer edge of the endometrium

The Applebaum Scoring System parameters are [10]

Diameter of the endometrium

Layers of the endometrium

Less than three waves in 60 seconds=0

Three or more waves in 60 seconds=3

Homogeneity of the myometrium

Zone 3 vascularity of the endometrium

We used Dydrogesterone (Duphaston) 10 mg twice daily orally for 14 days starting from day three after the day of the trigger. A serum pregnancy test was requested 16 days after hCG triggering. We did a pelvic scan at four weeks from the day of the trigger to confirm embryo viability. The same steps can be repeated (up to 2 successive cycles) in unsuccessful cycles if the couple agrees.

In the statistical tests, we used Excel and SPSS. The G Power software was used for calculating expected sample size and power.

The sample size of the point biserial correlation test was calculated to be 52 cycles. We also used G Power software with an α error of .05, moderate effect size of .37 and an 80% power.

In our study, we used 54 cycles of ovulation induction; 27 cycles were done in each group. The differences in the mean BMI (p=.153) and the mean age (p=.109) were not significant in both groups (Table 1).

Table 1: Age and BMI with letrozole and clomiphene citrate groups.

For the categorical data, we used Fisher's Exact Test. While we applied point-biserial correlation to calculate the correlation between the normally distributed continuous variables and the dichotomous variable (positive or negative test group); otherwise Rank-biserial Spearman's correlation was used.

The evidence was adequate to suggest that there is a moderate relationship between endometrial thickness on the day of trigger and pregnancy success rate with a p-value of 0.0004 and an Rs of .463. The mean mid-cycle width of the endometrium was higher with the positive test group (positive group 10.84 ± 2.18 vs. 8.06 ± 1.84 for the negative group). 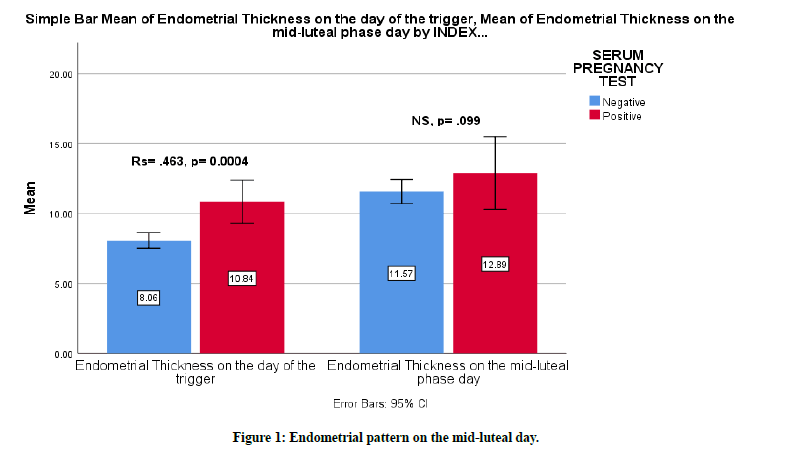 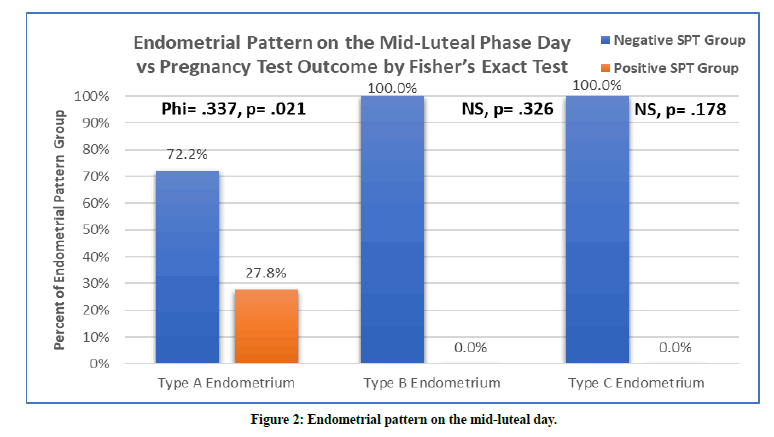 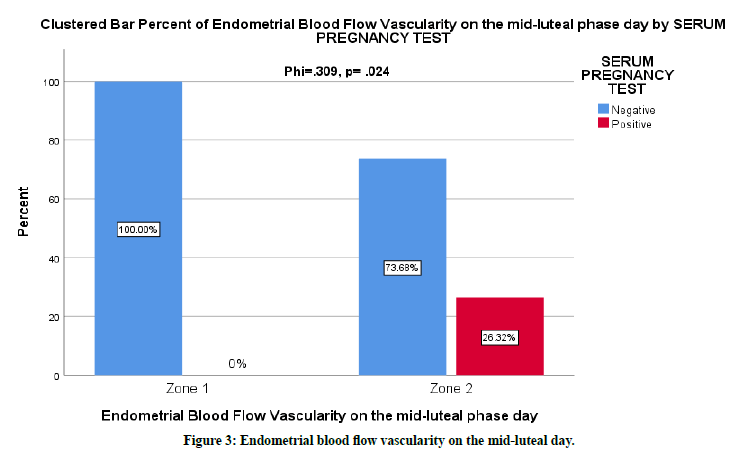 The mean of the Applebaum Endometrial Receptivity Scoring System was higher with the positive pregnancy test group (14.7 ± 1.34 for the positive group vs 11.27 ± 3.14 for the negative group). There was evidence to suggest that there is a correlation between Applebaum score and pregnancy rate, rs=0.485, p=0.0002 (Figure 4).

On the trigger day, there was no sufficient evidence to suggest that sub endometrial artery PI & RI has a rule in predicting pregnancy success with a p-value of 0.11, 0.19, respectively (Table 2). 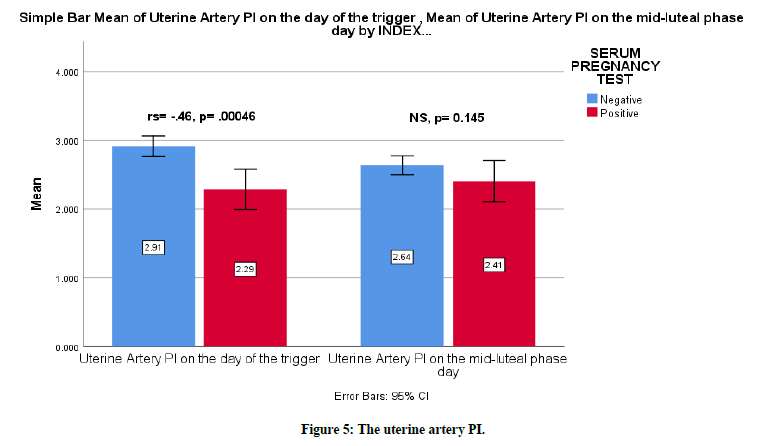 The mean of uterine arteries RI on the day of the trigger was lower with the positive pregnancy test group 0.84 (SD=0.04) vs .89 (SD=0.04) with the negative pregnancy test group. There was evidence to suggest that with lower uterine artery RI, the possibility of pregnancy increases. There was a moderate correlation between pregnancy success rate and uterine artery PI, rs=-0.42, p=0.001 (Figure 6). On the mid-luteal day, there was no sufficient evidence to suggest that there is an effect on pregnancy success rate neither from sub endometrial artery PI or RI nor from mean of uterine arteries PI or RI with a p-value of 0.22, 0.11, 0.145, 0.2 respectively (Table 3).

Finally, the total pregnancy rate was 18.52%. The pregnancy rate in the clomiphene group was 14.8% vs 22.2% for letrozole group. However, Fisher's Exact Test was performed to examine the relationship between the ovulation induction medication and pregnancy rate. The evidence was not sufficient to suggest that there is a relationship with a p-value of 0.728 (Figure 7). 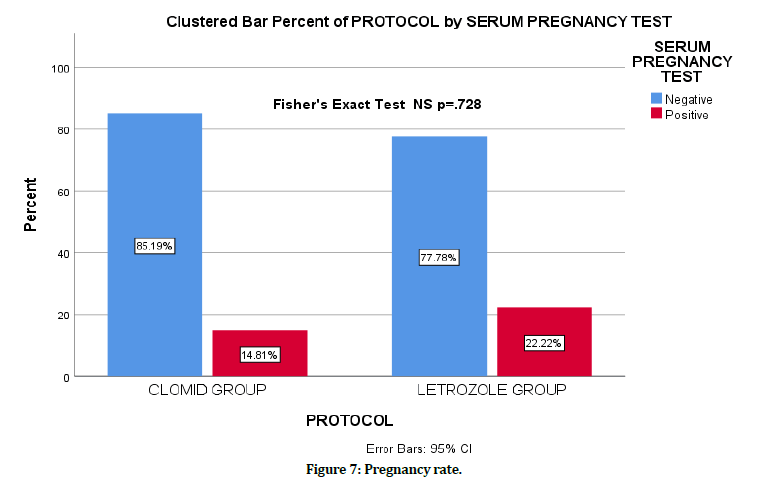 Endometrial perfusion is thought to be a regulatory factor of the receptiveness of the endometrium. Uterine resistance PI and RI are significantly lower in the positive pregnancy test group. Before embryo transfer, the receptiveness of the endometrium can be predicted by the spiral artery doppler indices [11]. Also, Steer et al. and Cacciatore et al. think that uterine artery PI and RI is lower in IVF infertile couples with the positive pregnancy test group [12,13].

On the other hand, many studies found no evidence that PI and RI values in IVF cycles significantly different between groups for the failed and the successful pregnancy test [14,15]. It was suggested that the highest pregnancy rate occurred uterine arteries PI is between 2-3 [16,17]. All of the studies of uterine and sub endometrial perfusion conduct so far were in the setting of IVF or IUI, and none of them was done with oral ovulation induction setting. This study aims to evaluate uterine blood flow in subfertile couples to reveal the possible role of the uterine doppler parameters in infertility management.

Consequently, we hypothesized that abnormal uterine and sub endometrial blood flow might be a crucial causative element in infertile ladies. There are many suggested invasive ways to predict the receptiveness of the endometrium, including biopsy and immunohistochemical studies. The use of doppler ultrasonography is a non-invasive way of studying the impedance of the uterus.

On the trigger day, we also found that sub endometrial artery PI & RI has no rule in predicting pregnancy success while the mean of the uterine arteries PI & RI has. We can use uterine arteries PI & RI in infertility management to predict the successful cycles. On the mid-luteal day, none of the doppler parameters has a rule in infertility management. Our data indicates that pregnancy rates were 18.52 %. It was higher with the letrozole group (22.2% vs 14.8%), but the difference has no statistical significance.

The authors would be keen on expressing gratitude to the members of the school of Science and Technology (SSST) university and the administration of Almoosa Specialist Hospital for their support towards making this research a success.

A consent to be involved in the research was taken from every single couple. Moreover, the approval of the ethical and research Committee in Almoosa specialist hospital was obtained.

The authors bore the entire cost of the research and did not obtain any economic assistance from any organization.

The authors state no conflicts of interest.