Helicobacter pylori can be demonstrated in tissue by Gram stain, Giemsa stain, haematoxylin & eosin stain, Warthin-Starry silver stain, acridine orange stain, and phase-contrast microscopy. Hence the present study was premeditated to analyse the role of Immunohistochemistry versus Hematoxylin and Eosin and special stains in detection of Helicobacter pylori in gastric lesions. A total of 455 gastric biopsy specimens were received over a period of 2 years from October 2015 to September 2017. Of these 100 cases were selected which had adequate data. 60 cases were randomly selected and analysed for Helicobacter pylori infection using H&E, Giemsa and IHC. The most associated endoscopic finding with gastritis in the present study was erosions followed by erythema (linear bands/erythematous mucosa). Sensitivity and specificity of Giemsa was 95.2 % and 100% respectively. Sensitivity and specificity of H&E was found to be 90.5 % and 100% respectively. Best results were obtained by Immunohistochemistry, especially when the density of organ ism was low. The cost, applicability and authenticity of the Giemsa stain make it an ideal stain in detecting Helicobacter pylori infection in gastric biopsies.

Helicobacter pylori, previously called as Campylobacter Pylori, a gram negative, micro aerophilic bacterium is found usually in the stomach. At least half the world's population 1s infected by the bacterium, making it the most widespread infection in the world [1]. Helicobacter pylori is a spiral campylobacter like bacteria, identified in 1982 by Australian scientists Barry Marshall and Robin Warren. Helicobacter pylori's helix shape is thought to have evolved to penetrate the mucoid lining of the stomach [2]. People infected at an early age are likely to develop more intense inflammation that may be followed by atrophic gastritis with a higher subsequent risk of gastric ulcer, gastric cancer, or both. It is accepted to be a major cause of chronic antral gastritis and there is evidence of involvement of this microbe in the etiology of duodenal ulcer and gastric carcinoma. Chronic gastritis is common problem worldwide. Previously many etiologic agents have been implicated to cause chronic gastritis such as smoking, NSAIDs, spicy foods and socioeconomic status [3]. But now it has been proved that in addition to the above Helicobacter pylori is the most common cause [4].

Hence, it is important to determine the presence of the organism in surgical pathology specimens and management of these two common diseases of the upper gastrointestinal tract. Antral biopsy specimens processed for histology provide an easier and cost-effective alternative means of diagnosing Helicobacter pylori infection. A topographic study of H. pylori density and distribution and the comparison of biopsy sites for the histopathological diagnosis of H. pylori conclude that two antral biopsy specimens, one from lesser and other from greater curvature have close to 100% sensitivity for detecting H. pylori infection.

Different special stains have also been used to detect Helicobacter pylori in these histological sections, but their specificity and sensitivity vary greatly. The haematoxylin and eosin stain are the most frequently used stain in histology. Modified Giemsa stain has been preferred because of its ease to perform and availability in most laboratories. All these stains depend on the morphology of the bacterium for identification.

Immunohistochemical techniques have been developed and the use of anti-Helicobacter pylori antibody which reacts with somatic antigens of the bacteria have been found to correlate with the presence of the bacteria. The aim of this study was to determine the reliability of modified Giemsa stain in comparison with Immunohistochemical technique in diagnosing Helicobacter pylori.

This prospective study was carried out m the Department of Pathology, Sree Balaji Medical College and Hospital, with the help of Department of Medical Gastroenterology, Sree Balaji Medical College and Hospital, during October 2015 to September 2017. A total of 455antral gastric biopsies were received using Olympus CV- 170 endoscope and out of those 100 biopsy samples with adequate data were selected. Of these, random samples of 60 antral biopsies were taken for this study.

All cases of gastritis detected by histopathology irrespective of age were included for study.

Those with poor clinical data were excluded from the study.

Out of the 455 cases, 100 cases had adequate clinical data. Of these 100 cases, 60 cases were selected at random. Those biopsy materials were processed, and sections were cut at 5 microns. Hematoxylin and eosin staining of sections was done. Histopathological examination of these sections were done. Section from gastric biopsy had been categorized using Sydney grading system based on activity, chronic inflammation, intestinal metaplasia, atrophy, Helicobacter pylori colonisation and the results were tabulated. Special stain (Giemsa stain) and Immunohistochemical study using In situ Rabbit polyclonal antibody for Helicobacter pylori was done on 60 cases and degree of antibody expression was scored in each case. Positive control was taken as, a stomach infected with H. pylori.

• Washed in water for 2 minutes.

• Harris hematoxylin is put and left for 8-10minutes.

• Wash in tap water for 2 minutes.

• Then wash under running water for 5-8 minutes.

• Dehydrate, clear in xylene and mount in DPX.

Methods of tissue preparation for IHC

Preparation of the paraffin slides

Identify the appropriate tissue block by confirming with the corresponding H & E.

Paraffin sections were cut at 5 micrometre and mounted on polylysine coated slides.

Slides were dipped into xylene (three times) for 5 minutes each to remove the paraffin.

Tissues were re-hydrated by dipping the slides into absolute ethanol two times each for 5 minutes.

• Trisodium citrate buffer was poured into the pressure cooker with slide carrier.

• Sections were left in the Tris buffer for about 7- 8 minutes or 2 whistles.

• Slides were then washed m tap water for 3- 5minutes followed by distilled water.

• Endogenous peroxidase was quenched by dipping slides into a fresh aqueous solution of 3% peroxide for 15 minutes.

• Slides were then washed m tap water for 3-5 minutes followed by distilled water.

• Then slides were rinsed with Tris buffer for each 5 minutes, three changes.

Detection of antigens in paraffin sections

• The primary antibody was added at a dilution selected usually for half an hour to 1 hour.

• Secondary antibody was then added and left for half an hour.

• A solution of chromogen 3,3'- diamino benzidine (DAB) at 1mg /ml was made in Tris and added.

• Slides were dipped in a solution of hematoxylin which was diluted at 1:1 in distilled water and stained for one minute to produce an exceptionally light nuclear counterstain.

• Then it was washed for 1 minute in distilled water

• Then washed in xylene 3 times.

• Slides were then mounted and viewed under microscope.

The data was statistically analysed using Microsoft Excel 2016 and IBM SPSS ver.23. The significance of the results was assessed by determining the probability factor 'pvalue' using Pearson Chi Square test.

Table 1: Age and sex distribution of 100 patients with gastritis.

Out of 100 cases 93% were found to be of lower socioeconomic status. The socioeconomic status was assessed using Modified Kuppuswamy scale (proposed updating for Jan' 17). The scores were given on the basis of factors such as education, occupation, monthly income (Table 2).

The most common symptom that the patients with gastritis exhibited in the present study was found out to be abdominal pain with majority (38%), presenting it (Table 3).

Out of 100 cases of gastritis, 34 cases were smokers, 39 were alcoholics and 42 were tobacco chewers. The P value obtained by Chi Square test for smoking, alcohol, and tobacco was 0.009, 0.006, and 0.025, respectively. It was also observed that prolonged duration of smoking and alcohol increases the risk of H. pylori associated gastritis (Table 5). Table 6 illustrates Sydney scoring ingastric biopsy of 100 cases presented with symptoms. Out of 60 cases studied with IHC for H. pylori, 42 cases were positive and 18 were negative (Table 7).

Table 5: Risk factors such as smoking, intake of alcohol, tobacco in 100 patients with gastritis.

Table 13: Comparison between IHC and Giemsa. 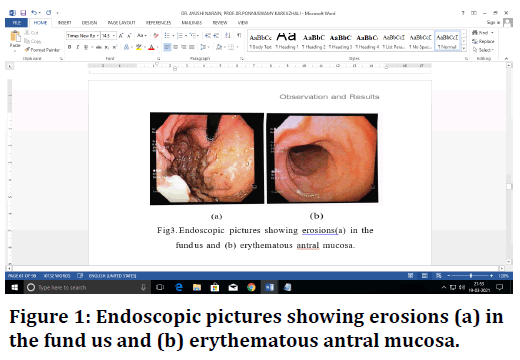 Figure 1. Endoscopic pictures showing erosions (a) in the fund us and (b) erythematous antral mucosa. 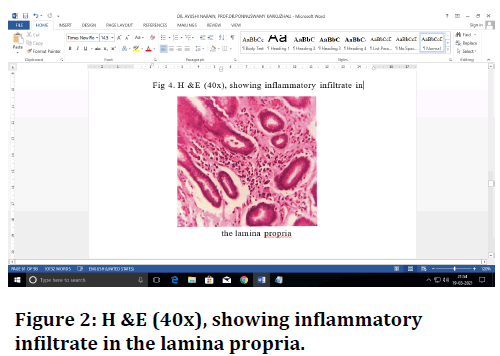 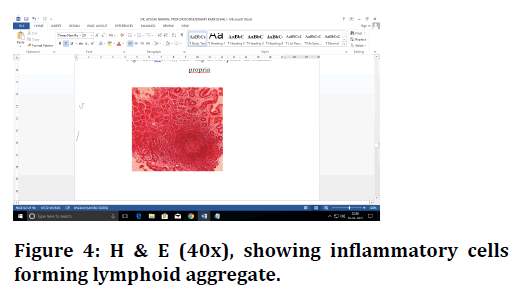 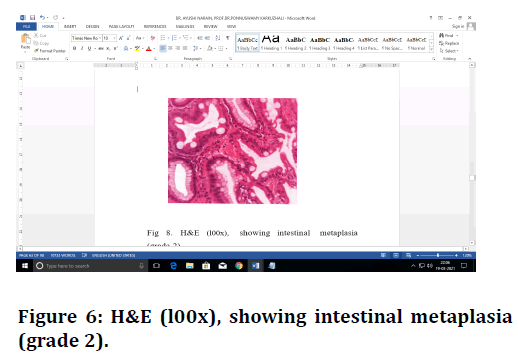 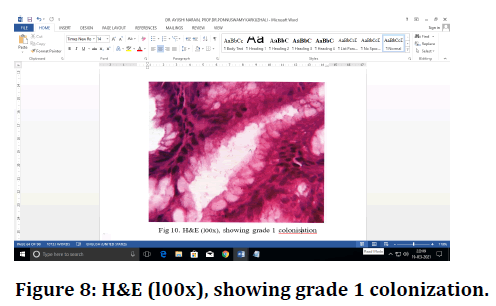 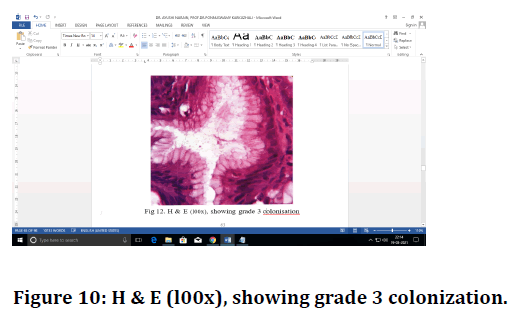 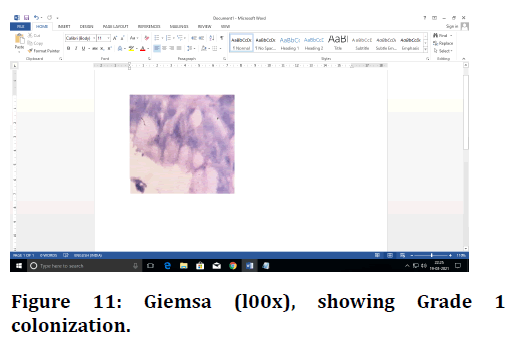 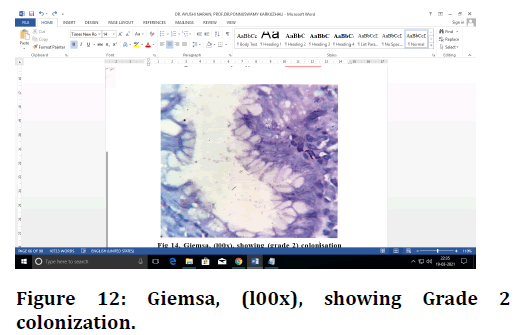 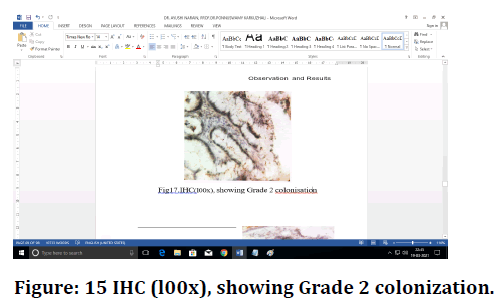 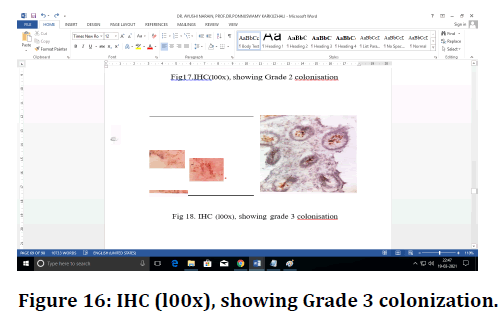 Helicobacter pylori infects the stomach and causes chronic active gastritis, which can lead to peptic ulcer disease, gastric adenocarcinoma, and mucosa-associated lymphoid tissue lymphoma. In this present study a total of 100 samples of antral biopsies were studied. For all these cases, clinical data and risk factors related to gastritis were collected. Out of 100 cases 60 cases were randomly selected for Giemsa and IHC. In a study conducted by Rajesh et al [5] 92 out of 265 cases were found to be positive for Helicobacter pylori with over all prevalence of 34.71%. Out of 603 cases, Helicobacter pylori was positive in 345 cases with prevalence of about 57.2% in the study conducted by Adisa et al. [6]. In the present study, out of 100 cases, 42 cases (42%) were positive for Helicobacter pylori. Infection with Helicobacter pylori occurs worldwide, but the prevalence differs among countries and various population groups in the same country. It is more common in developing countries, low socioeconomic strata, and overcrowded settings. The prevalence of Helicobacter pylori infection varies widely by geographic area, age, race, ethnicity, and socio-economic status. Javed et al. [7] in his study concluded that 80% of patients belonged to lower and middle class.

Consumption of alcohol, cigarette smoking and tobacco chewing are some etiologic factors that have a close relation with acid peptic diseases. Chronic active gastritis is reportedly associated with chronic alcohol ingestion. However, the inflammatory changes are likely to be related to concurrent Helicobacter pylori infection that is common among alcoholics. Furthermore, chronic alcoholism is also correlated with the presence of gastric metaplasia [16].

Javed et a1. [7] in his study of 50 cases (40 males, 10 females) of patients with gastritis observed 28% of patients were smokers, 12% of them were tobacco chewers and 2% were alcoholics. Ananth et al [18] in his study of 146 chronic atrophic gastritis patients found out that the prevalence of H. pylori among smokers was 54.16% and among alcoholics was 54.28%. In present study 34% cases were smokers, 39% were alcoholics and 42% were tobacco chewers.

In majority of the patients’ dietary habits associated with gastritis were spicy food intake. Sensitivity and specificity of Giemsa was 95.2 % and 100% respectively. Sensitivity and specificity of H&E was found to be 90.5 % and 100% respectively. Best results were obtained by Immunohistochemistry, especially when the density of organ ism was low. Immunohistochemistry is recommended for detection of Helicobacter pylori where the other two stains have low detection rate.

The cost, applicability and authenticity of the Giemsa stain make it an ideal stain in detecting Helicobacter pylori infection in gastric biopsies.