Objective: Chronic obstructive lung diseases are caused by Smoking. Therefore, the objective of this study was to assess the obstructive changes of lungs in spirometry caused by smoking. Methodology: This was a case control study conducted at Ghazi goth, more than 5 kms from New Subzi mandi (case area) by using non probability convenient sampling technique. The duration of study was about 6 months from August 2019 till Jan 2020. Sample size was 245. 100 subjects were residents of ghazi goth taken with age, socioeconomic strata & BMI while the 145 workers belong to vegetable market new Subzi mandi Karachi (case group). Males with age of 18 to 60 years, Residents of area more than 5 km away from vegetable market were included in the study. Three pulmonary function parameters such as FEV1, FVC and FEV1/FVC were evaluated in routine Spirometry. Chi square and independent t-test was applied. Results: The study results showed that baseline characteristics between both groups has insignificant association i.e. age, weight, BMI, hours of working & duration since working. While height has significant association, the workers of vegetable market were taller. Control group indulge more in smoking (53.77 ± 6.14) than case group (36.68 ± 3.42) (pack years of smoking has significant association (p<0.05). Mean of FEV1 (Forced expiratory volume in first second) found subnormal in this group (75 ± 25.8). Mean of FVC% (forced vital capacity) significantly reduced (p=0.000) in control group (90 ± 36.1) as compared to case group 122.4 ± 74.7. Conclusion: This study concluded that smoking is associated with obstructive changes in lung in routine spirometry. Furthermore, predicted forced vital capacity was significantly reduced in control group than case group owing to smoking was more indulge in control group.

Smoking is a public wellbeing dilemma that leads to develop a variety of disorders. About 1.2 billion populace smoke globally [1-3]. In the European Union, 700,000 deaths are caused by the smoking annually [1]. Disorders that are directly related to smoking involve respiratory, oncological, cardiovascular, and cerebrovascular critical situations [4,5]. Most extensively affected system by smoking is the human respiratory system wherein infection rapidly transmit from the smaller to the bigger airways. Moreover, Smoking is a prognostic factor for hyper responsiveness of bronchus, chronic obstructive pulmonary disease (COPD), asthma, and lung cancer [6]. In the United States, smoking is liable to develop chronic airway disease in 80% of cases [7]. Smoking also causes neutrophilia [8].

In order to evaluate the lung functions, Spirometry is the most generally used which is an easy and fast procedure. Routine spirometry measures Forced expiratory volume in first second (FEV1), Forced vital capacity (FVC), and the ratio of the two volumes (FEV1/FVC) [9]. Spirometry and the measurement of FEV1/FVC permit the recognition of restrictive or obstructive ventilator disorders. A FEV1/FVC less than 70 % in which FEV1 is decreased over FVC suggests an obstructive disorder for instance asthma and chronic obstructive pulmonary disease (COPD). The FEV1 might be reported as a proportion of the prognostic value that indicates the acuteness of the impairment. A FEV1/FVC more than 70% in which FEV1 is decreased over FVC indicates restrictive disorder for instance interstitial lung diseases (such as idiopathic pulmonary fibrosis) and chest wall malformations [10].

If spirometry indicates signs of impediment in airways as established due to reduction in forced expiratory volume in first second (FEV1) or FEV1/forced vital capacity (FVC), the findings reveal a decline in lung function [11].

One prospective, cross-sectional study by Dugral and Balkanci in which Spirometry was used to assess lung function; they measured the forced expiratory volume per second (FEV1), the forced vital capacity (FVC), and the FEV1/FVC ratio. They demonstrated that smokers reported considerably more breathlessness and production of sputum as compared to non-smokers, although revealed improved FVC and FEV1 rates. Persons who smoked not as much had notably poorer FVC and FEV1 rates as compared to non-smokers. Furthermore, smokers showed considerably lesser FEV1/FVC ratios in comparison with non-smokers [12]. Earlier studies performed by Nawafleh et al. [13] and by Lorensia et al. [14] observed that lung function (FEV1/FVC) were varied among smokers and non-smokers. Smoking decrease diffusing capacity & current smokers & people with COPD have an increased risk of severe complications & higher mortality with COVID-19 infection [15].

Termination of Smoking is the only most successful remedy for COPD. Additionally, smoking cessation reduces the chances of coronary heart disease, stroke, many types of cancer, and it is also related to an increased expectancy of life [17]. Regardless of the continuing inflammatory process, it is evidently supported that that the speed of progression of COPD can be decreased with the cessation of smoking [18]. The initial suggestion reported from longitudinal cohort researches that persons who smoke continuously had a much steeper decline in pulmonary function than those persons who had quit smoking [19].

This was a case control study conducted at Ghazi goth, more than 5 kms from New Subzi mandi by using non probability convenient sampling technique. The duration of study was about 6 months from August 2019 till Jan 2020. Sample size was 245 that were calculated using Statistical formula. 100 subjects were residents of ghazi goth (control group) taken with age, socioeconomic strata & BMI while the 145 workers belong to vegetable market new Subzi mandi Karachi (case group). Males with age of 18 to 60 years, Residents of area more than 5 km away from vegetable market were included in the study whereas females and known case of respiratory (asthma, COPD) or cardiovascular disease were excluded from the study.

Table 2: Association of mean ages and anthropometry, comparison of duration and working hours and mean comparison of pulmonary parameters between cases and controls. 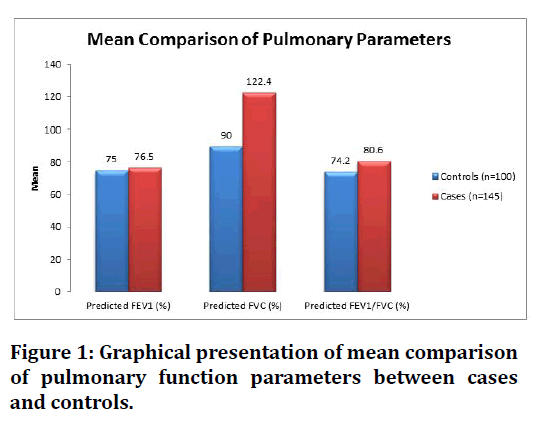 Pulmonary functions are explored by FEV1, FVC, and FEV1/FVC parameters; both smoking and physical exercise effects on all 3 standards. One research by Twisk et al revealed that smoking reduced the FEV1 and FVC, whereas value of FVC increased by the physical activity [20]. Another study by Holmen et al reported that the FEV1 and FVC parameters were prognostic factors of improved lung function [21] Similarly, one research observed that smokers had improved FEV1 and FVC levels as compared to non-smokers, however those persons who smoked < half pack on a daily basis had worst FVC and FEV1 levels over non-smokers [12]. The present study showed that mean predicted FVC 90 ± 36.1 was seen in smokers of control group and 122.4 ± 74.7 in smokers of case group with a significant difference between them (p=0.000). It indicated that decreased Forced Vital Capacity (FVC) in control group reflecting obstructive lung disease.

Further analysis performed by by Mhase et al. in 2002 evaluated the smoking effect on 115 people who were occupationally exposed to dirt and smoke by analyzing pulmonary function parameters. Indicators like FVC, FEV1, and FEV1/FVC ratio were documented. It was noticed that smokers were significantly highly affected by lung diseases and were associated with their smoking habits. The variation in parameters were observed such as FVC (p<0.001), FEV1 (p<0.001) and FEV1/FVC (p<0.001) signifying the mutual effect of fumes and dirt on the disease progression [22]. The present study was inconsistent with the above reported study and stated that pulmonary functions were associated with the smoking and dust particles of case and control groups. It was observed that predicted FVC was significantly associated (p=0.000) with smoking in control and case group whereas insignificantly association found in Predicted FEV1 (p=0.73) and Predicted FEV1/FVC (p=0.22) of case and control group.

In Indian study conducted by Bano et al. in the year of 2009 examined pulmonary function test on spirometry of 100 males that comprised of 50 smokers and 50 nonsmokers in a rural areas, stated that smoking is a frequent practice that is commonly seen in both rural and urban areas. It was reported that all the pulmonary function parameters significantly decreased in smokers, reflecting obstructive lung impairment. Furthermore, it was also found that lung function impairment was 17.3 times more in smokers than non-smokers [23]. The present study was in accordance with the above cited study and revealed that significant reduction observed in predicted FVC between case and control group (p=0.000) while insignificant reduction observed in Predicted FEV1 (p=0.73) and Predicted FEV1/FVC (p=0.22) of smokers in case and control group.

Briefly, there are different facts that timely judgment by using a variety of pulmonary function parameters can assist to recognize lung function impairment in symptomless smokers. Timely recognition with appropriate psychotherapy for smoking termination can stop expected morbidity and alleviate the chances of diseases related with the smoking behavior.

This study concluded that smoking is associated with obstructive changes in lung in routine spirometry. Furthermore, predicted Forced Vital Capacity was significantly reduced in control group than case group owing to smoking was more indulge in control group. Hence, timely pulmonary function tests should be carried out in smokers to find out decrease in lung volumes and termination of smoking should be persuaded, especially in Pakistan where most of the people smoking tobacco.

We acknowledge all participants from Ghazi Goth Karachi for their support throughout the study.