Cataract is one of major cause of blindness, 44% cases of blindness is due to cataract only. In developing countries such as India cataract is more common, and it manifest earlier in life than the most developed countries of the world. Cataract is more common in dry and hot area where sun (UV) exposure is more than prolong cloudy cover. In this study we are aimed to compare effects of UV-ray irradiation on cell viability of HLEC (Human lens epithelial cell) culture by using trypan blue dye exclusion assay against the unexposed control HLEC culture. Total 20 cataract patients from Dept. of Ophthalmology of Lata Mangeshkar Hospital, Nagpur were included in this study. The capsulorhexis sample from cataract surgery taken for study from eye OT. The capsulorhexis sample without any UV-ray exposure taken as control. For culture of HLEC’s RPMI 1640 medium containing 10% fetal calf serum used. The HLEC cultures were UV-ray irradiated with increasing time exposure PHILIPS® TUV 15W/G15 T8 ultraviolet UV rays tube. The Trypan blue dye exclusion assay was used to analyze cell viability. The slides were analyzed using Olympus® BX51 Research microscope with oil immersion and 100 were observed per sample. The cell viability was calculated using Epi info® (version 6.0), as subject means with standard deviation. Statistical significance will be defined at P≤0.001. Out of 100 cases the 12 were female and 8 were male. Mean age of both male and female patients were 62.45±3.18(SD). A positive linear correlation was found (r:0.819, p<0.001) between the time of UV-Ray exposure and death cells per 100 observed LECs.

Cataract is one of the major causes of blindness. 44% cases of blindness are due to cataract only. In developing countries such as India cataract is more common, and it manifests earlier in life than the most developed countries of the world [1]. Years of exposure to UV rays cause the protein in the lens of the eye to clump and thicken, preventing light from passing through it. This clouding and thickening of the lens is known as a cataract, and it is the leading cause of vision loss in the world. The cataract caused by ionising radiation as UV-ray, different from that caused by age [2]. The age-related cataracts are most commonly found in the nuclear region and cortical cataracts are commonly found in diabetic patients while the ionising radiation is generally although not exclusively associated with posterior sub capsular and sometimes cortical opacities [3]. UV rays can damage our vision every day, deteriorating the lenses of our eyes. Too much time in the sun can speed cataract development, so it is important to limit your time in direct sunlight. Not wearing proper eye protection is another culprit, so keep in mind that sunglasses are equally important in the winter as well as the summer. Daily choices that you make can protect your precious eyesight. Hats, wraparound sunglasses, and lenses that offer 100 percent UVA and UVB protection can help prevent, or at least delay, cataract formation.

Giblin et al. [4] previously reported on how long-term exposure to low-dose UVA induced the development of nuclear cataract (NUC) in a guinea pig model [5]. Although many previous epidemiological studies have reported an association between cortical cataract (COR) and UV light [6-8], most of these studies were conducted in regions ranging from mid- to highlatitudes. To date, only a few studies have been conducted in low latitude regions with strong UV exposure. Some studies investigating NUC have reported no association with UV exposure [5,8], in contrast, others have reported relationships between these factors [9-13]. In addition, some reports have indicated an association between UV exposure and posterior subcapsular cataract (PSC) [14]. Retrodots (RD) and waterclefts (WC) are cataract subtypes that cause decreased visual function, with a high prevalence among middleaged to elderly individuals [15,16]. Because no studies have investigated associations between UV exposure and these types of cataract, their relationship with UV exposure remains unknown. Moreover, few reports have examined this relationship in a single race living in regions with different UV intensities.

There have been few reports of the effects of diagnostic UV-Ray exposure on the lens, although number of researchers have suggested that repeated exposure to UV-ray, computerized axial tomography (CAT) scans radiation, drugs reaction may have cataractogenic potential.

Patient selection: This study comprised cataract patients of all ages, who had undergone phacoemulsification. The informed consent was obtained from the participants. The patients lived in with the surroundings of contact of radiation as UV-ray was excluded from study.

Sample collection: The circular pieces of human anterior lens capsulorhexis sample was collected post operatively in sterile normal saline from cataract patients from the eye OT of institute’s hospital. The type of cataract was noted as per lens opacities classification (LOC) system III [17].

Tissue Culture of Human Lens Epithelial Cell (HLEC): Sterilisation of lab ware and culture room. Cleaning and sterilisation of glassware were carried out by the standard protocol using appropriate disinfectants followed by autoclaving of glassware at 15 lbs for 20mins. Inoculation room was fumigated with 5% formaldehyde spray in the culture room. The UV light was switched on for half an hour, before preparing the culture media. RPMI 1640 media used to culture the HLECs.

Human lens epithelial cell (HLEC) culture: Cell culture was carried out as per Goyal et al. [18] to acclimatize the HLEC Cells, a single rhexis was placed in 1ml of RPMI medium containing 10% foetal calf serum in a single well of a 24 well plate and was incubated for 1 hour 30 minutes on appropriate CO2 pressure at 37°C.

Slide preparation: The rhexis was removed from the trypan blue dye and was washed twice in PBS (phosphate buffer solution). Then rhexis was immediately mounted on a drop of PBS, on clean dry grease free slide. The slides were analysed using Olympus Research microscope with oil immersion and 1,000 cells were observed per sample. Only nucleated cells that were separated without overlapping or folds were analysed. 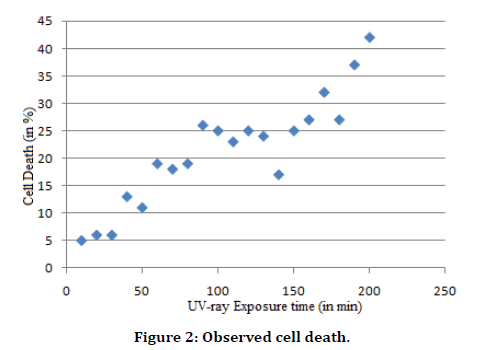 Cataract is the multifactorial disease. Various causative factors are behind the development of cataract. Though the age-related cataract is more prevalent the other factors also play an important role in the pathogenesis of cataract. Beside this cataract is more common in dry and hot area where sun (UV) exposure is more than prolong cloudy cover.

A lot of researchers worked on the pathogenesis of cataract but most of them were concentrated on the age-related cataract and some on non ionising radiation. Therefore, it was significant to know the comparative effects of UV-Ray irradiation on HLEC against the unexposed control HLEC Culture. From the proposed research we have achieved the viability of the HLEC in the UV-Ray radiation and determined the minimum time through UV-Ray exposure.

According to Robert, et al. [20] radiation exposure can lead to impaired vision and transient or permanent blindness. Both ultraviolet-A (UV-A) and UV-B induce cataract formation and are not necessary for sight. Ultraviolet radiation is also a risk factor for damage to the retinas of children. The removal of these wavelengths from ocular exposure will greatly reduce the risk of early cataract and retinal damage. One way this may be easily done is by wearing sunglasses that block wavelengths below 400 nm (marked 400 on the glasses). However, because of the geometry of the eye, these glasses must be wraparound sunglasses to prevent reflective UV radiation from reaching the eye. Additional protection may be offered by contact lenses that absorb significant amounts of UV radiation. In addition to UV radiation, short blue visible light (400-440 nm) is a risk factor for the adult human retina. This wavelength of light is not essential for sight and not necessary for a circadian rhythm response. For those over 50 years old, it would be of value to remove these wavelengths of light with specially designed sunglasses or contact lenses to reduce the risk of age-related macular degeneration.

According to American Optometric Association [21] Ultraviolet (UV) radiation comprises invisible high energy rays from the sun that lie just beyond the violet/blue end of the visible spectrum. More than 99% of UV radiation is absorbed by the anterior structures of the eye, although some of it does reach the light-sensitive retina. The UV radiation present in sunlight is not useful for vision. There are good scientific reasons to be concerned that UV absorption by the eye may contribute to age-related changes in the eye and several serious eye diseases. Protection can be achieved by simple, safe, and inexpensive methods such as wearing a brimmed hat and using eyewear that absorbs UV radiation.

Krivandin et al analyzed diffraction, structrual conversions of crystallins in human lens were detected in senile cataract and upon artificial dehydration of lens tissue. In senile cataract certain characteristics of the native threedimensional structure of γ- and β-crystallins are completely lost, whereas during dehydration of lens tissue a small but significant contraction of these protein molecules takes place. Upon artificial UV-irradiation of bovine crystallins destructive changes are observed, which are remarkably similar to those in cataract.

Apart from the scientific research we interacted with the patients, the knowledge of research designing and the exposure to the scientific protocols and biostatistics analysis.

We collect data regarding alcohol consumption of cataract patients of Vidarbha region, our data also support all research report. We also found risk of cataract more in alcohol drinker.

From this research it can be concluded that the prolong exposure of UV-ray dose might be lethal to the LECs and it may have cataractogenic potential, as these cells are precursor of eye lens.

The none to declare.