Aim: To study the prevalence and the most common of the developmental dental anomalies in dental students (2018-1019).

Material and methods: The dental students in the collage of Dentistry/Baghdad university were included in this study, 600 students were clinically and radiography examined and assessment of the dental anomalies was carried on which included the number of anomalies, shape and positions of the anomalies.

Conclusion: Dental anomalies can be caused by genetic factor and local factor; males are affected more than females. Number anomalies were recorded to be the highest percentage than other types and the impacted third molar recorded a higher percentage than an impacted canine.

The tooth is regarded as a specialized part of the body of the human. A successful development of the tooth depends on the dental epithelial complex reciprocal interaction with the underlying Ectomesenchyme. This interaction involves a complex serial molecular signal with a receptor and transcription control system [1].

Any disturbance of the interactions between the epithelium and mesenchyme can greatly affect the normal Odontogenesis and lead to the developmental anomalies of the teeth and this depends on the stage of development in which the alteration had been taken place [2].

The developmental anomalies have a marked deviation from the normal contour, color, number, size and the degree of development of the teeth. The local as well as the systemic factors can be responsible for these disturbances in development. These influences can begin before or after the birth, so the dentition might be affected [3].

The developmental anomalies can be categorized into five groups which include abnormalities in morphology, number, size, structure and positions of the teeth, which showed a various forms such as fusion, gemination, concrescence, dens evaginatus, dilacerations, enamel pearls, dens invaginatus, peg laterals or taurodontism [4].

Gemination can be defined as a double teeth that usually seen in the anterior region of the maxilla [5], it arises by invagination at the division of a single tooth germ, resulting into a one tooth with a two crowns that are completely separated; or into a large crown that is incompletely separated with single root and a single root canal, causing an esthetic problems in relation to the tooth alignment, arch asymmetry and spacing [6]. The etiology of the geminated teeth still unknown, but the nutritional deficiency, endocrine effects, inflammatory/infectious processes, excessive medicines ingestion, congenital or hereditary diseases, ionizing radiation and local trauma can be considered as causative factors [7].

fusion can be defined as the union between enamel and dentin of a two or more separately developing teeth. There may be a complete union with the formation of a one abnormal large tooth; union of union of roots or crowns only [8]. This anatomical irregularity can occur more in the deciduous dentition and with a more incidence in the anterior region [9]. Fusion can be due to the physical force or pressure that is generated during the growth, the occurrence of a viral infection during a pregnancy and it has been reported with many congenital anomalies, like cleft lips and also in an X linked congenital anomalies [10]. The fusion can cause an aesthetic problem and an occlusal disturbances caused by the crowding and the irregular morphology [8].

Concrescence can be defined as a cemental union of a two adjacent teeth but without affection the underlying dentin, it can occur during or may be after the completion of the formation of the root [11]. The pattern of development usually involves a second molar tooth that has their roots closely approximated to the adjacent impacted 3rd molar tooth. It can be is suspected that the restriction of the space during the development, hard occlusal forces, local infection or local trauma after the development may play a role in the occurrence of the concrescence [12].

Dilaceration is a bend or a deviation in the linear relationship of the crowns of the teeth to their roots, occurring in the apical third of the roots when the anterior teeth are involved, in the middle third of the first molars and the coronal third when the third molar teeth are involved [13]. Roots dilacerations are more common than the crown dilacerations and it occurs usually in the posterior region of the permanent teeth [14]. However the crown dilacerations are usually found in the permanent maxillary incisors and to be followed by the mandibular incisors. Clinically, maxillary incisors can show a lingual deviation, while the mandibular incisors can incline labially. Peri apical inflammation and necrosis of the pulp may be seen as common findings even with the absence of any decay because the bent portion can act as a nidus for the bacterial entrance because of a defective enamel and dentin [15].

Dens invaginatus (DI) is known as the anomaly of the pregnant woman. It occurs as a consequence of the invagination of the external surface of the crown of the tooth before its calcification [16]. This invagination can ranges from a very short pit that is confined to a crown to an invagination that is deep into the root and sometimes can extend to or even beyond the apex of the root. The odon tome-like is the most severe form and is often called the invaginated odontomes [17]. The majority of these cases are found in the maxilla and the most commonly affected is the lateral incisors and followed by the central incisors then the premolars, canines and lastly the molars. It can arise because of the proliferation of the Hertwig’s root sheath. A local failure in proliferation or growth of any part of the epithelium of the inner enamel can be involved in the formation of the invagination [18].

Dens evaginatus can be defined as an aberration during the tooth development which results in an accessory cusp with a morphology that can be described as an abnormal tubercle, protuberance, elevation, extrusion, excrescence or bulge [19]. A combination of a multifactorial etiology, both environmental and genetic factors has been considered for the formation of dens evaginatus. It can occur during a bell stage and is usually characterized by an abnormal proliferation of the inner epithelial enamel into the "stellate reticulum" of the enamel organ [20].

The enamel pearls is considered as an enamel ectopic globule that is harly attached to the root of the tooth. During the normal development of the tooth, the ameloblasts will lose their activity after the formation of the crown and will become a part of the Hertwig’s epithelial root sheath. Sometimes for an unknown reason, the ameloblasts will retain the competence og the enamel and this will result in a prolonged (projections of cervical enamel) or a delayed (enamel pearls) production of ectopic enamel [21].

Taurodontism can be defined as a tooth with large pulp chambers, in which the trifurcation or bifurcation can be apically displaced, leading to the development of a chamber with a more apical-occlusal height than the normal teeth and lacking of the constriction at the cemento-enamel junction level (CEJ). It is caused by a failure of the Hertwig's sheath invagination at a proper horizontal level. Other possible causes have to be noticed, including the spontaneous mutation and additional factors influence like infections on the tooth development [22].

A peg lateral is described as a tapered, undersized, lateral incisor of the maxilla [23]. The tooth shape is conical; broad cervically and taper incisally into a blunt end point. Unusually, it may occur as a peg-shaped central incisor of the maxilla. A peg shaped tooth may develop from a single lobe rather than four. A peg shaped laterals can be determined genetically and the endocrinal disturbances may also be a cause [24].

Dental students in collage of dentistry /Baghdad University were included in our study in which 600 students were examined clinically and radiography from November 2018 to April 2019, with age range from (18-23 years) and Iraqi in origin. Clinical examination for whole samples were happened by using dental mirror and probe for detection any dental anomalies if presence. Radiographic examination used for impacted teeth. And assessment of dental anomalies which included, shape anomalies like peg lateral, number anomalies like congenital missing teeth, supernumerary teeth, positional anomalies which are impacted third molar and canine.

Distribution of dental anomalies according to gender

In this study 600 students were examined and only 250 dental students had dental anomalies, 150 of them were male and 100 of them were female as shown in Table 1.

Table 1: Distribution of dental anomalies according to gender.

Distribution of dental anomalies according to age group 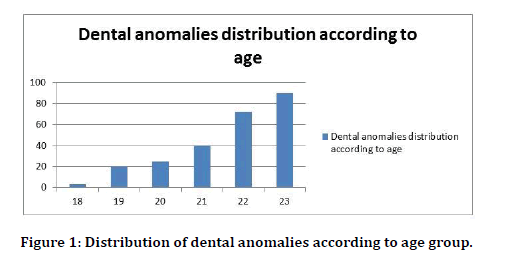 Figure 1: Distribution of dental anomalies according to age group.

Distribution of dental anomalies according to the types 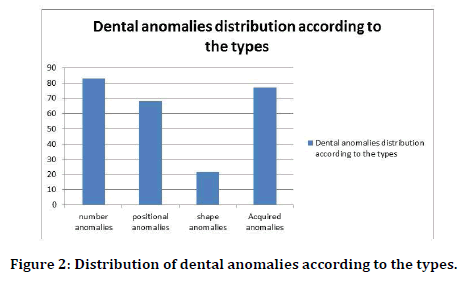 Figure 2: Distribution of dental anomalies according to the types.

Distribution the types of number anomalies 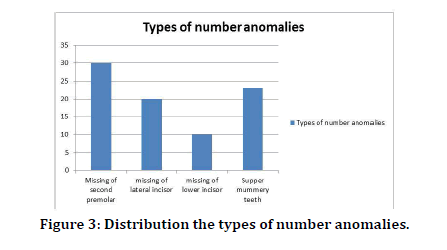 Distribution the types of positional anomalies

Distribution the shapes of positional anomalies 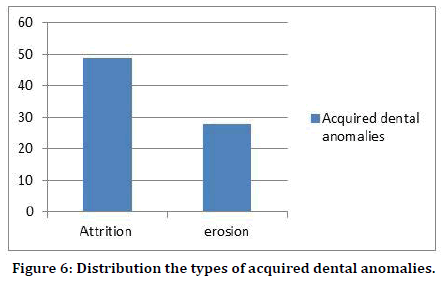 The dental anomalies are regarded as usual congenital malformations that can occur either as an isolated finding or as a part of syndromes. The developmental anomalies can influence the morphology and can appear in different forms. All of these anomalies have a clinical significance in concern to malocclusion, aesthetics and more necessary preparations for the development of the dental decays and oral diseases [2].

An impacted third molar had recorded the highest percentage than the impacted upper canine in present study and this was may be due to the systemic factors which includes febrile disease, endocrine deficiency and irradiation [27] or because of the local factors, like prolonged retention of deciduous teeth or early loss, arch length deficiency, mal posed tooth germs, trauma, supernumerary teeth, odontogenic tumors, cleft lip and palate and abnormal eruption path may influence the impaction of the permanent teeth [28]. Peg shape anomalies recorded a higher percentage than Dens evaginatus and females were affected more than males in these anomalies. In the present study, attrition acquired anomalies had recorded a high significant difference between males and females and a higher percentage than erosion acquired anomalies which may be due to stress and anxiety of the students.

1. Dental anomalies affected males more than females according to the current study except in attrition acquired dental anomalies in which females recorded a higher percentage and a high significant difference as compared with males.

2. Missing of second premolar recorded the highest percentage than other types of number anomalies

3. Congenital missing of the second premolar and supernumerary teeth recorded a high significant difference between males and females than other types of number anomalies.

5. Impaction of the third molar recorded the highest percentage and a significant difference between males and females than impaction of the upper canine.

6. Attrition was recorded the highest percentage and a significant difference between males and females than erosion.