Introduction: Sickle cell disease (SCD) is a genetic disorder with autosomal recessive inheritance causing abnormal haemoglobin. It is an important medical problem globally as well as in our community at Eastern province of Saudi Arabia. It accounts for large numbers of morbidity and to a lesser extent mortality. Several natural plant products over the world, which were known in some communities and their traditional healers, were studied and found to have properties in improving SCD manifestation. This research was planned to explore if any plant product under our study could prove being an effective anti-sickling agent for therapeutic use in SCD management. Objectives: Studying the effects of some plants on sickled RBCs as well as comparing between efficacies of these different plants. Material and Methods: The 49 fresh whole blood samples, extracted through venipuncture in EDTA tubes, were collected from known SCD patients whose homozygosity was confirmed by haemoglobin electrophoresis. These patients were not on recent blood transfusion or hydroxyurea, and aged 14 years or above of both sexes on clinical follow up. The dried rhizomes of turmeric (curcuma longa) powder and dried seeds flour of fenugreek (trigonella foenum-graecum) were used to evaluate the reversal type of anti-sickling activity on RBCs. Results: Out of 49 blood samples, 28 (57.1%) samples were from males and 21 (42.9%) samples from females. The average (± SD) age of the cases was 28.2 (± 9.97) years with range 14–60 years. Significant anti-sickling activity was found using Turmeric rhizomes extract treatment with 66.81% reversal effect, and 61.28% anti-sickling action when fenugreek seeds extract was used. Conclusion: The findings of this study suggest that turmeric (C. longa) rhizome extract and fenugreek seed extract could have promising anti-sickling properties for SCD treatment.

Our region (Eastern Province of Saudi Arabia) has the fifth major haplotype-the Arab-Indian type-(also called the Asian or Saudi haplotype). This has milder disease phenotype due to some genetic factors such as high levels of fetal haemoglobin and alpha thalassemia state that are commonly observed in the region [4].

The HbS polymerization leading to sickling has been mainstay of the pathophysiology of SCD. Hydroxyurea, a fetal haemoglobin inducing agent has been shown to decrease the number and severity of sickle cell crises [1-3,5]. It has been approved by FDA (1998) and European Medicines Agency (2007). The Agency for Healthcare Research and Quality (AHRQ) in 2008 and the National Institutes of Health Consensus Development Conference has also recognized it [5-7]. Various anti-sickling agents have been investigated and confirmed to have ameliorative properties [7].

Despite its wide acceptance, hydroxyurea is moderately toxic drug especially when administered for long-term duration [8]. In search of inexpensive but effective and readily available therapy, several investigations have been conducted on indigenous plant materials and their products. Among the commonly used plants in Nigeria and other African nations for management of many illnesses including sickle cell disease are leaves of Terminalia catappa (Indian almond) [9,10], and Carica papaya (papaya) [11]. Others include Cajanus cajan (pigeon pea) seeds [12], Adansonia digitata (baobab or upside-down tree) bark, Khaya senegalensis (African mahogany) leaves, and root of Fagara xanthoxyloides (Senegal prickly-ash or artar root) [13].

Anthocyanins extract of Trema orientalis was analyzed for anti-sickling/anti-hemolysis effect in vitro in Congo. It has been suggested that its effect was by interfering with intracellular polymerization of HbS or by scavenging the RBC free radicals [14]. The anti-sickling effect of ginger dried rhizomes has been in-vitro experimented [15].

The aim of this study is to explore if Trigonella foenum graecum or Fenugreek and Curcuma longa rhizomes could be effective as anti-sickling agents by reversing the already sickled RBC in order to alleviate sickle cell disease morbidity and to reduce the associated mortality.

Dried rhizomes of turmeric (curcuma longa) powder and dried seed of fenugreek (trigonella foenum-graecum) flour were used for the study. Individually preparing 5 grams of each plant material in covered glass flasks, soaked in 200 ml normal saline (0.9% NaCl) for 25 mg/ml concentration in room temperature for 24 hours. These solutions were filtered and kept in 2-6 °C (refrigeration). The required amounts were taken and brought at room temperature for use at the time of procedure. 2% sodium hydrosulphite has been used as sickling agent

After taking institutional (IAU/KFHU) approval, 49 fresh whole blood samples through venipuncture in EDTA tubes, were collected from known SCD patients whose homozygosity were initially screened by sickling test and confirmed by haemoglobin electrophoresis. The patients were sample part of the routine follow up CBC analysis. These patients were not on recent blood transfusion or hydroxyurea, and aged 14 years or above of both sexes on clinical follow up. The dehydration or over hydration has been avoided in the selection of cases. The experiment was performed to evaluate the reversal anti-sickling activity of the plants under study.

In this in vitro experiment for each blood sample, 0.1 ml of 2% Sodium Hydrosulphite sickling agent solution was added in test tube to 0.2 ml whole blood. This was gently mixed and kept for standing for 10 minutes at room temperature.

The peripheral blood (PB) smear was made from the mixture (pre). After which, 0.1 ml of this mixture was added to 0.1 ml of each test containing plant materials (curcuma longa and fenugreek solutions) in separate test tubes.

It was mixed thoroughly and kept at 37 °C in thermostatic dry incubator for 30 minutes. Subsequently, the PB smears were made (post). Both these (pre & post) PB smears were examined under x100 high power with oil emersion light microscope for estimating the percentage of sickled and non-sickled RBCs for anti-sickling assay (reversal effect). The following formula was used: 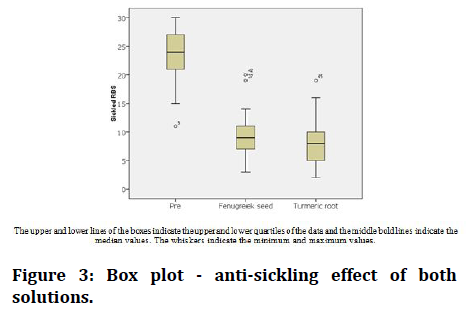 Table 2 shows the percentage of normal RBC with pre-treatment estimation of 76.6% while with Turmeric rhizomes extract showed 92.2% (p value<0.001) of red cells and compared with fenugreek seeds extract, which gave 90.9% (p value<0.001). The p-value=0.025 was found between the two products.

Table 3 shows that in relation to the pre-treated sickled RBC, 61.28% of cells become corrected and reversed into non-sickled by applying fenugreek seeds extract with 38.72% remained irreversibly sickled. However, when turmeric rhizomes extract was used, 66.81% or around two thirds of sickled cells were normalized while 33.19% stayed uncorrected. Turmeric to fenugreek effect ratio of 1.09:1 (Figure 4). Figure 4. Doughnut chart for comparison of anti- sickling effects of both solutions with pre-treatment.

Sickle cell disease is an inherited autosomal recessive disorder which is common in Sub-Saharan Africa, the Mediterranean areas, Arabian Peninsula, South Asia, and Southeast Asia. According to the World Health Organization, African population has the highest prevalence of the disease that ranges from 10-40%, and in countries where the trait prevalence is over 20%, the disease affects about 2% of the people [16]. Generally, it is estimated that 7% of the overall populations in the world are carriers of hemoglobinopathies [17-21]

The phytotherapy is recently used as an alternative medicine that can provide relief for SCD patients. The review of the literature indicated that various plants have been tested and shown to have anti-sickling potential effects, of which was Curcuma longa [18-21].

It was reported that the extracts of rhizomes of C. longa have several pharmacological effects such as anti-inflammatory, anti-cancer, healing, cholesterol-lowering, hypoglycaemic, anti-Alzheimer, anti-plasmodial, antioxidant, anti-venom, antibacterial, antifungal, antipyretic, and analgesic properties. It also has protective potential against diabetic retinopathy and other pathologies [18].

According to several studies, the anti-sickling effect of plants is mainly due to the presence of anthocyanins and organic acids. Anthocyanins interact with HbS, competing with the polymerization process and preventing RBC sickling [20-21].

Although this study was limited with time constrain, manual-steps process but it was good to establish such a study in Saudi Arabia where SCD affects many patients particularly in Eastern and South Western areas.

Further studies are recommended to identify the specific compounds of different parts of these herbs that pharmacologically cause their therapeutic activity. Moreover, dose and additive effects as well as drug-interactions are suggested in future evaluation. In addition, in vivo researches with more objective, practical and validated advanced techniques are recommended, also, to correlate all of that with the disease phenotypes in multicentre analysis on larger cohort groups to provide more understanding of the beneficial effects of such plant products.

The finding of this study suggests that Turmeric (Curcuma longa) rhizome extract and Fenugreek seed extract were shown to have anti-sickling properties for SCD management. Further studies are required to confirm and explain the roles of plant products in-vivo.

I would like to thank those who kindly provide generous support, starting by my supervisor Associate Professor Mohammed Yunus for his scientific guidance and sincere criticism all the time. I also thank Professor Layla Bashawri, Professor Yasser Osman and Assistant Professor Amr Zaher for their role as advisory committee members.

Also, special regards and appreciation to KFHU hematology laboratory staff as well as a lot of thanks to my colleagues and patients.

Dr Rawda Aljadar: Main investigator and write up the thesis.

Declaration of Conflict of Interest

All authors declare that there is no conflict of interest.

No funding was provided.