The most popular technology that had become the centre of choice in dental restorations is all-ceramic material [1]. One of the most frequently used all-ceramic core material for fixed dental restorations is yttrium-stabilizedtetragonal- zirconia-polycrystal (Y-TZP) [2]. The clinical long-term success of Y-TZP depends on the strength and durability of resin cement bond to ceramic substrates and teeth that will be integrating all system parts into a coherent structure for enhancing the bonding strength for ceramic dental restorations [3]. A strong cement-ceramic bond requires micromechanical interlocking and/or chemical bonding to ceramic restoration surface, which needs surface roughening procedure [4]. Polycrystalline structure, which lacks a glass matrix, makes zirconia ceramic more resistant to hydrofluoric acid etching [5]. Air-borne particle abrasion [6], sandblasting, grinding with diamond bur [7], zirconia primers, tribochemical silica coating have been applied for surface conditioning [8].

Airborne particle abrasion imposes a removal of a significant amount of material which could affect its clinical adaptation. Tribochemical silica-coating system has been criticized for possible subcritical crack propagation within zirconia thin restorations [9]. Lasers have been employed for different purposes in dentistry including tooth structure or restorative surface conditioning [10].

In this experimental study, 112 discs were milled from zirconium oxide presintered blocks ( vita YZ HT zahnfabrik/Germany) Figure 1, then sintered in a special furnace (Oven600/V2, South Tyrol) at 1450 °C for 8 hours including cooling, following the manufacturer’s instructions. The final disc dimensions were: (9 mm in diameter, 2 mm in thickness) (Figure 2). The bonding surface of zirconia discs was then polished consecutively with 600, 800, 1000, and 1200 grit silicon carbide abrasive papers with water coolant to standardize all surfaces. All specimens were ultrasonically cleaned in distilled water and 7o% alcohol for 3 min. Then examined under an optical microscope (OM) for presence of crack or fissure, and substituted by other perfect samples when needed. 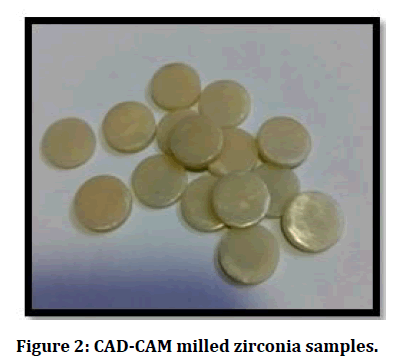 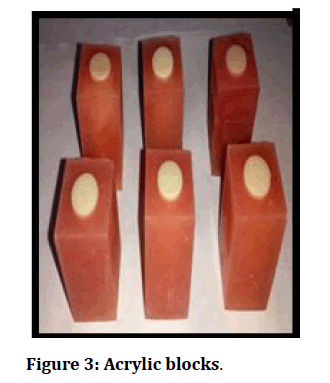 Silicon mold was used for letting the resin cement on zirconia surfaces, Figure 4. It was provided with a central circular opening of 5 mm diameter, and positioned over the acrylic mold ensuring that the circular opening being cantered over the zirconia disc. An adequate amount of adhesive cement (Rely X U200 self-adhesive resin cement, 3M ESPE, Germany) was auto mixed and delivered into the opening of the silicon mold. Then photo polymerized using a light cure device (Astralis5, Ivoclar Vivadent, Liechtenstein) for 40 s following manufacturer's instructions, as in Figure 5. And after one hour, specimens were stored in distilled water at 37°C for 24 hours before SBS test. 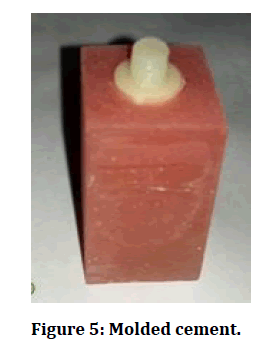 The shear bond strength (SBS) was determined by subjecting samples to a shearing force at the zirconiacement interface in a universal testing machine (Instron, England), at 50% load for 1min/1mm, shown in Figure 6. The SBS values were evaluated in Mpa. Six samples: one as untreated sample, and five samples, from each laser group, that expressed the highest SBS values were examined for their average surface roughness (Ra), using an atomic force microscope (AFM).

All debonded samples were evaluated under a stereomicroscope (SM) at 40X magnification (ME, 2665, Euromex, Holland) for mode of failure evaluation. The modes of failure were classified as:

Adhesive: De-bonding only at the cement-ceramic interface.

Cohesive: A rupture in the cement or zirconia ceramic.

This analysis was done with SPSS software version 23/ France. SBS and laser pulse depth (LPD) Data were analyzed by a one-way ANOVA-test (analysis of variance) to calculate the P-value between control and tested groups. LSD test was used to calculate the significant differences between tested means.

The SBS mean values of the 60 μs, 700 μs pulse duration groups are drawn as a function of power, and shown in Figure (7A) and Figure (7B) respectively. The general behavior of the five groups is the SBS increase with powe and number of irradiated pulses increasing. For the short pulse duration (60 μs), it was observed that the maximum SBS was obtained with 30 s, 60 μs, 4W laser parameters and the minimum SBS was obtained with 20 s, 60 μs, 1W laser parameters. For group A and B, the power increasing was accompanied by little SBS enhancements, except for 30 s, 4 W specimen, which witnessed a marked elevation in the SBS value. In group C, the 60 μs for 40 s laser irradiation time revealed that the threshold for the SBS increase was at the 3 W, and the maximum SBS value was reached at 4W, beyond which, no further gain in the SBS enhancement was observed. 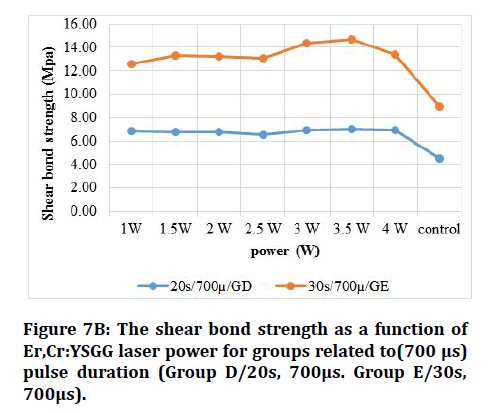 The LPD mean values of the 60 μs, 700 μs pulse duration groups are drawn as a function of power, shown in Figure 8A and Figure 8B respectively. 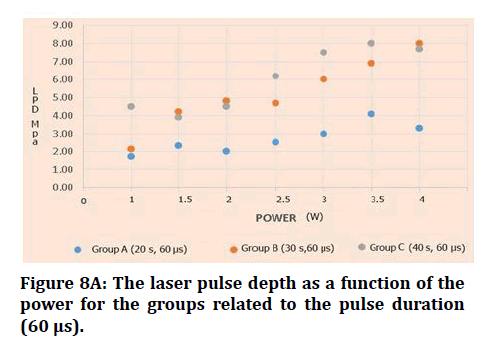 Figure 8A: The laser pulse depth as a function of the power for the groups related to the pulse duration (60 μs).

Figure 8B: The laser pulse depth as a function of power for groups related to the(700 μs) pulse duration.

The general behavior of the five groups is LPD increase with power and number of irradiated pulses increasing.

Table 3: Average surface roughness values for one specimens of the highest SBS from each laser treated group.

The frequency of the failure modes after the SBS test for each group is shown in Table 4. The results indicated that the failure modes of the groups varied with the different laser parameters used. In group A, C type (1) failure mode was frequently observed in those specimens treated with 1-3 W for both groups. On the contrary, the failure mode of type 3 was mostly detected in group D, E except for (2, 2.50) W and (1, 1.50) W respectively. Type (2) had the least frequency in group B (4W) and E (3.5) W.

The aim of the current study is the enhancement of SBS of resin cement to zirconia ceramic material, without laser optical damaging to zirconia surface such as cracks or fractures. Many laser studies attempted to investigate the effect of laser type, zirconia-surface temperature effect during irradiation, zirconia ceramic type and sintering condition, and resin cement type on the SBS, and found conflicting results. The laser pulses duration is important for laser material processing, so it’s effect should be studied. Laser predefined parameters are essential for obtaining a desired zirconia ceramic surface modification [13]. Surface roughness is crucial for increasing bonding strength values [19]. The obtained results showed that samples treated with Er,Cr:YSGG laser showed increased surface roughness as compared with untreated zirconia samples. Regarding the 60 μs groups, the higher SBS mean value was with Er,Cr:YSGG laser specimen: (8.63 Mpa), with Ra value: (8.88 nm) and LPD (8μ). While for the 700 μs groups, the higher SBS mean value was for a specimen: (7.64 Mpa) with Ra value: (14.5 nm) and LPD (8.2μ). The increased Ra and LPD values, for the 700 μs group, over the 60 μs groups, was not accompanied by SBS increasing as well. These findings were in good agreement with [17], who reported surface roughness increase with higher powers and long pulse duration. But it had no enhanced for the bond strength. Also, [20] concluded that, only 4 W CO2 laser irradiation for Y-TZP ceramics is recommended as an alternative surface treatment to sandblasting. These results disagreed with [21], who examined surface roughness on Y-TZP surface after Er:YAG laser treatment at (1.5 W/20 Hz), and concluded that laser had decreased the surface roughness. This could probably be due to the fact that the author had used low laser powers. The behavior of the long pulse in the zirconia roughening is of lateral laser-heat dissipation, contirbuting to morphological changes in zirconia structure beyond the LPD periphery, for the temperature elevation within the laser affected zone that the low powers capacity would not be effective, and the higher powers would lose their heat confinement, imposing a material damaging effect. The resultant pattern is increased LPD, and Ra values of a weakened resin-cement interlocking, as shown from the SBS results. The amount of pulses striking the irradiation zone per second, strongly affect the absorption and ablation process, as it determines the amount of ablated particles and therefore the created depth that elevate the SBS to an optimized enhancement. For the 60 μs group, the short pulse heat confinement encouraged for no power wasting. So increasing the time of laser irradiation from 20s to 30s had in turn increased the number of pulses by two times without needing an increased power. Gaining the ablation process much more energy per second of irradiation, needed for efficient LPD creation. So all of the micro holes had increased in depth, exposing larger surface areas for resin cement to flow and polymerize into rigid mechanical interlocking. The 30 s laser irradiation time for low powers (1, 1.5) W, had higher LPD values than the long pulse duration (700 μs) group. While for high powers (2 W) and above, the long pulse duration group had higher LPD values compared to short pulse groups. This could be explained as: the energy per pulse, of the 60 μs group for low power specimens, is of confined heat, creating well-defined depth with no loss of energy to area peripheral to LPD. Which was not the case for the 700 μs pulse duration. At higher powers, for the 700 μs groups, the zirconia surface would turn over-heated with repeated, high energy pulses, an effect, when combined with the heat dissipation, would create an increase in LPD values, over the 60 μs group.

The derived results had reached the following conclusions: The highest SBS of the Er:Cr:YSGG laserirradiated specimens are obtained with the laser parameters of the 30s, 60μs, 4W. Higher surface roughness values were with the increased number of pulses per second, and pulse duration time, for high powers. But it had no enhancement on the bonding strength. The pulse duration and power are both vital parameters in zirconia ceramic surface roughness, for enhancement of the bonding strength to the resin cement.