One of the most widely used materials in prosthetic dentistry is polymethyl methacrylate (PMMA). Since its introduction to dentistry, it has been successfully used for denture bases because of its ease of processing, low cost, light weight, and color-matching ability. However, acrylic resin denture base materials have poor strength, including low impact strength and low fatigue resistance [1-5]. So that despite the use of (PMMA) widespread in prosthetic dentistry the fracture of dentures is common clinical occurrence in prosthodontics service and still remains as an unsolved problem [6]. The denture base resin was subjected to various stresses including compressive, tensile and shear stress inside the patient's mouth during function which lead to fractures of it. To overcome these limitations and improvement of the physical and mechanical properties of denture base materials done by incorporation of some rubber phase or by change in chemistry of the material. previous studies attempts, by addition a multifunctional crosslinking factor such as polyethylene glycoldimethacrylate [7] or by combining a rubber phase, metal oxides, metal wire or fiber [8-11], oxides of (Al, Mg, Zr) and powder (E-glass) particle, improved some of the mechanical properties of (PMMA) [12]. Also much trying has been directed toward improve the (PMMA) properties through incorporation of inorganic nanoparticales in to (PMMA). The properties of polymer nano composites depend on the type of incorporating nanoparticles, their size and shape, as well as the concentration and interaction with the polymer matrix [13]. To get (PMMA/alumina) Nano composite with improved properties over pure (PMMA) Alumina nanoparticles were treated with trimethoxysilylpropylmethacrylate (TMSPM) [14]. Several experimental studies have bear notable effects of Silica nanoparticles (amorphouscrystalline) on mechanical and thermal properties of (PMMA) when have been successfully mixed with it and other polymeric dental materials. The nano-silica incorporated with polymer matrix can improve the durability, strength, and the resistance of the polymer. The nano-composite properties are highly reliant on the molecular properties, particularly on the kind and sizes proportions of the organic-inorganic interfaces, on the systems of interaction between organic and inorganic components [15]. During the last years, curing processes of polymer have been modified in order to improve the physical and mechanical properties of those materials, and also to afford the technical work of the professionals.

So that different polymerization methods have been used: heat, light and microwave energy. This last method has the advantage of reducing time of cured, a smaller time for the obtaining of the plastic phase, a bigger homogeneity of the mixture and the achievement of a prosthetic material with excellent adaptation. From the polymerization reaction point of view, the degree of conversion is the most important characteristic, on account of the high residual monomer levels that could be unreacted. Its presence has an adverse effect on physical and mechanical properties [16]. Microwaves create an electromagnetic field act only on the monomer molecules made them flipped over rapidly, as a result of molecular friction heat is generated which uniform throughout the polymer is mass leading to sufficient polymerization without the development of a high exothermic temperature [17]. When microwaves act only on the monomer, which decreases in the same proportion as the polymerization degree increases. Therefore, the same amount of energy is absorbed by less and less monomer, making the molecules increasingly active. This self-regulatory curing programmed leads to complete polymerization of the resin [18].

Considering in the investing method, previous studies have reported the advantages in the use of a silicone layer and gypsum base to cover all of the denture teeth. Occlusal accuracy, absence of porosity, acceptable vertical occlusal changes, well-finished surface character, and reduced palatal shrinkage have encouraged prosthesis technicians to use silicone as a separating medium for acrylic denture processing. However, all of these studies have examined conventional heat-cured denture materials polymerized against silicone layers. No data has been collected concerning the effects of silicone-gypsum moulds on the final properties of microwave acrylic resins [19]. Therefore, in the present study was investigate the effect of adding Nano filler (SiO2) in different percentage by weight and in combination with different percentage of (MgO and Al2O3), in addition to evaluate the morphology of new materials after adding reinforcement nano filler to microwave acrylic resin denture base material on surface roughness.

The Table 1 some materials that were used in this study.

Table 1: Some of the materials that were used.

The adding of nano filler (reinforced materials) in different percentage to microwave acrylic resin to improve physical and mechanical properties. The reinforcement materials used in this study show in Table 2.

Seventy (70) specimens were prepared from microwave acrylic resin to divided into (7) groups and each groups have (10) specimens.

metal pattern were constructed with shapes and dimensions for surface roughness test (14mm width, 25 mm length, 3mm thickness) [20]. The flasking technique for complete denture was followed in the mold preparation. The metal patterns were coated with separating medium and allowed to dry.

The experimental samples were prepared by mixed the Percentages (1wt %) SiO2 with powder of microwave acrylic resin as show in Table 3, digital electronic balance of accuracy of (0.0001/g) was used, after addition (SiO2) nano particles to monomer (liquid of PMMA) microwave the filler were well dispersed in the monomer by ultra-sonication, using aprobe sonication apparatus (120 W, 60 KHz) for 3 minutes to break them in to individual nano crystal [20,21] as shown in Figure 1A-C.

Table 3: The percentages of reinforcement Nano materials and amount of filler, polymer and monomer of microwave acrylic resin. 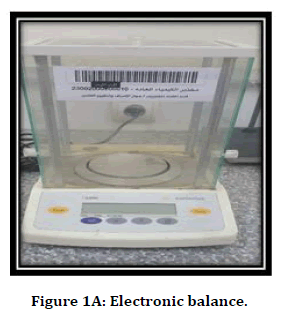 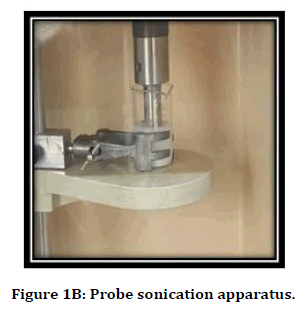 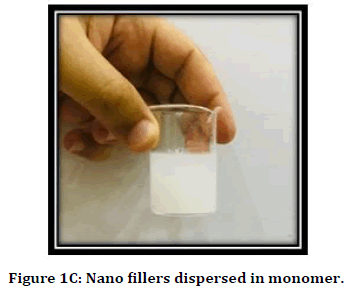 The suspension of the monomer with SiO2 Nano particles (1wt %) was immediately mixed with microwave acrylic resin powder, the mixing procedure according to manufactures instruction left for 15-20 min at 23°C until dough stage was reach then packing, curing at 500 W. for 3.0 min [20], finishing and conditioning according conventional methods the other experimental doing the same procedure.

All specimens were stored in distilled water containers at 37Cº for 1 week (b) [23].

The profilometer device was used. It is supplied with surface analyzer (stylus) made from diamond to trace the profile of the surface irregularities and recording all the peaks and recess which characterize the surface. Maximum distance that can be move is 5mm on the test samples. To ensure that measurements were done on different areas of each specimen (the same selected area of each specimen), and an average of three readings was calculated.

AFM used to evaluate the surface topography of new material after adding reinforcement materials it has been recognized as one of the most powerful tools for the analysis of surface morphologies because it creates threedimensional images at angstrom and Nano scale, This technique has been exhaustively used in the analyses of dispersion of nonmetric components in Nano composites and in polymer blends [24]. It is also an important that can provide information about physical properties of micro and Nano surface including size and shape, Software for measuring, manipulation, analyzing and visualization (one, two, and three dimension) [25], The lens power of the device used in this research to measure morphology is a million times it is used to investigate the morphology of the newly developed denture base resin.

Table 6: LSD test between groups and within groups for Surface roughness.

Table 9: LSD test between groups and within group for Surface roughness. 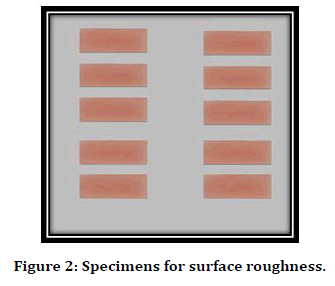 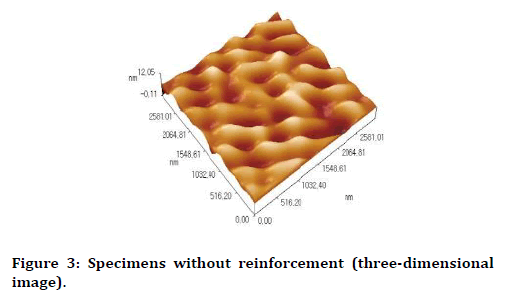 Three- dimensional image of nano filler group (B) 1% revealed a population of semi- homogeneous particles with irregular surface and some aggregation (Figure 4). 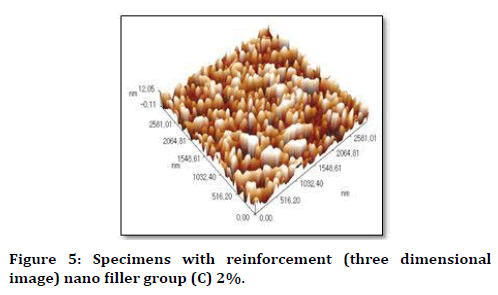 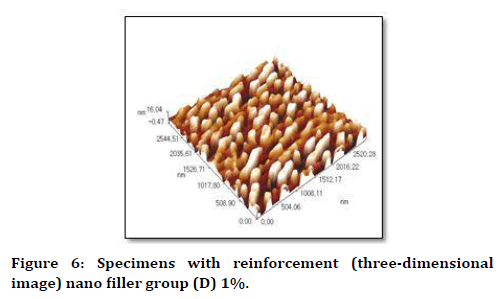 Several methods for efficient transformation of methyl methacrylate monomer to polymethyl methacrylate (PMMA) polymer were performed, one of them the microwave curing method, which were used to save the laboratory time by providing very short curing cycle only few minutes resulted in adequate acrylic properties compared to conventional heat cure method [26,27].

The surface roughness of denture material is necessary and important property because it affects the oral tissue when be in direct contact with denture [28]. So that any dental restoration or appliance is placed in the mouth of a patient, it should be highly polished.

The Profilometer device was used to the estimate the effect of adding Nano filler on surface geometry of the samples because this device appears to be an excellent device to evaluate surface roughness by giving a quantitative measurement that can be evaluated and compared statistically [29].

The results of surface roughness of microwave acrylic resin denture base with the addition SiO2 in (1wt %) taste specimen was non – significant difference compared with group (A) control (without reinforcement) this result due to that the nano SiO2 have very small size and well dispersion, also surface roughness test is concerned with outer surface and not with inner surface of composite, so when small percentage of nano- SiO2 particles were added to microwave acrylic resin only few particles will be involved with the surface of the specimen this is agree with (Ihab, 2011) who study the evaluate the effect of addition of modified nano-zirconium oxide (ZrO2) to heat cure acrylic denture base.